The Story Behind "Act Of War" 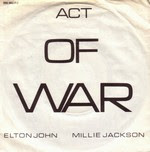 Elton hoped to duet with Tina Turner on his hard-rocking track, but she disliked the song’s mood, inspired ironically by her cover of “The 1984 Song”. “She wanted to sing more up lyrics, which is perfectly understandable” argumented Elton.

Millie Jackson, the substitute was a Rhytm and blues singer. Elton noticed she was coming to town for some concerts and arranged to have a rough tape of the song ready for her at the airport. She was so receptive: “I’ll do it no matter what key it’s in!” exclaimed about the suggestion.

But the single wasn’t taking seriously and, as Elton said, it was a “terrible disappointment” in sales terms, reaching only number 32 in UK. Several dance remixes of the song were edited at that time.
by Jackrabbit on 11:02 pm