A schoolmaster from England, Rowland Hill invented the adhesive postage stamp in 1837, an act for which he was knighted. The result, called the Penny Black, was engraved the profile of Queen Victoria's head, and remained on all British stamps for the next sixty years. Before the Penny Black stamp ever existed, payment had to be taken in cash for every article to be posted and that had to be done in person at the post office. Hill's stamps made the prepayment of mail postage possible and practical. The first United States general issue postage stamps, stamps for distribution throughout the country, were prepared under authorization of the Congressional Act of March 3, 1847. Postmaster General Cave Johnson initially instructed the firm to use a portrait of recently deceased President Andrew Jackson on the 5-cent stamp and George Washington on the 10-cent denomination. Since then, many stamps have been issued around the world. Some of the most popular types have included sports figures, cartoons, national landmarks, nature images and, of course, celebrities: like Elton. A number of illegal stamps featuring Elton John are in circulation printed by private firms without the knowledge of the postal authorities of the countries concerned. Here's is a selection what Jack Rabbit found on every corner of the world.

Grenada issued a set of eight $1 stamps featuring rock, pop and reggae stars Tina Turner, Lionel Ritchie, Whitney Houston, Joan Armatrading, Madonna, Elton John, Bruce Springsteen and Bob Marley, all of whom have had more longevity than is usual in the ever-evolving world of music.

Elton John in concert on 6 postage stamps - from Udmurtia, a Russian republic located in European Russia about 1300km east of Moscow and west of the Ural mountains. 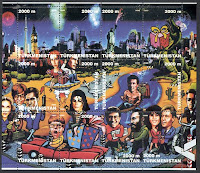 'Rock Legends: Elton John' pertaining to be from the Republic of Somalia. The stamp features Elton wearing his 1986 world tour outfits, although there's another version of sheetlet containing set of 4 values unmounted mint. These "stamps" is counterfeit, not valid for posting and has no investment value. Other celebrities are on the collection like David Bowie, Prince, or Michael Jackson, among others, as part of their Rock Legends series. 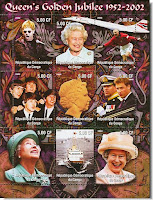 A fantastic sheet of 9 Mint Stamps to celebrate Queen Elizabeth II's 50th or Golden Jubilee, features Elton John, Prince William and Prince Andrew, Soccer Stars like David Beckham, the Beatles, the Royal Ship and more. They were released on Congo or Tadjikistan.

Released in Malta, celebrating Elton's open-air concert in Floriana, Maltapost, as one of the sponsors, has been promoting a personalised souvenir sheet featuring four images of the entertainer, views of him as a young man and in some of his most memorable looks. It has no philatelic or postal worth, except an authentic Malta stamp valued at Lm1.50 reproducing the view of the Marsamxett side of Valletta from the Frama label set. 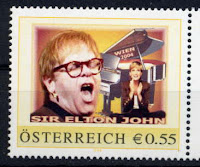 Printed in Austria, the stamp joined Elton and Lady Diana. Sir Elton John performed at the annual Life Ball in Vienna, late May 15, 2004 and was back in June, again in Wien. 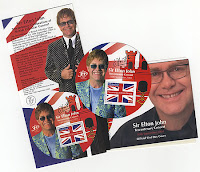 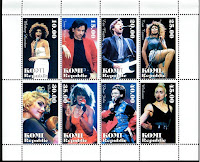 Rock Stars like Elton John, Eric Clapton, Diana Ross, Tina Turner, Madonna, Whitney Houston, Jean Michael Love and more were released in Komi Republic, Russia, on a 8 Mint Stamps. They were not valid for postage, but they were extremely popular because of their lively and colorful designs. 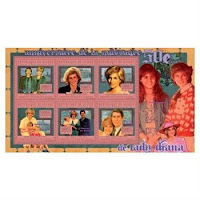 Another sheet of 6 stamps, issued this time by Guinea in 2011, commemorating the 50th anniversary of the birth of Princess Diana. Also featured on the sheet shown include Prince William, Prince Harry, Charles, Prince of Wales, Sarah Ferguson, Duchess of York, and Grammy Award-winning English singer & pianist Sir Elton John.

Sources: Mary Bellis from about.com
by Jackrabbit on 1:35 pm