The Eltonite's Day With... Jennifer Sundstrom!!! 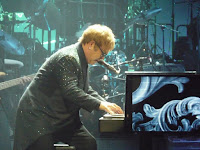 Hi Eltonites, welcome to the Eltonites Day. I like this kind of interviews, I must admit. Interviewing an eltonite is very grateful for me: their thoghts, their experiences. Today I have the chance to have one of the kind. She is a wonderful human being first and foremost. And of course a top class Eltonite!! So please, stand up to receive the greatest Jennifer Sundstrom!!!

Welcome Jennifer, thanks for being here. Could you tell us, please more, who are you and where are you from?

Hi! My name is Jennifer Sundstrom and I am from Houghton, Michigan. I live almost as far North as one can in the state. Lake Superior surrounds us.

The first time I consciously remember hearing Elton’s music was when I was about 10 years old. That’s when "I Guess That’s Why They Call It The Blues" was first out on the radio. I acquired the 45 rpm vinyl single around that time and played it to death. I still have it in a box, but doubt it’s in good shape! After that I continued to enjoy his music when I heard it on the radio and bought a couple more singles and some of his CDs such as "Love Songs" and "Greatest Hits: 1970 – 2002", but it wasn’t until I first saw him perform live that I really started buying as much of his catalog as I could. Of course, after buying all of the albums, I realized that I had heard and enjoyed his music way before the age of ten, but just didn’t yet know who he was!

Incredible, I have the same experience, my friend. And what was it like seeing Elton for the first time and how many concerts have you been? 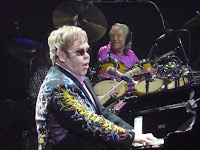 I first saw Elton perform live at the Red Piano show in LasVegas on March 31, 2008, and have been hooked ever since. However, this was something that almost never happened! My brother, sister-in-law and I had planned a short trip to Las Vegas months earlier, but didn’t have a specific agenda. About 2 weeks before we went, I was flipping through channels on the television and happened upon a rerun of Larry King interviewing Elton. In the interview Elton mentioned the Red Piano show. So after hearing this I checked online and found that he would be performing while we were out there, and we were lucky enough to get tickets. I came down with the flu an hour before my flight took off, but soldiered on. I was so miserable the entire time I was there except of course for the show. So, it almost never was. It must have been fate. I’ve now been to a total of 17 shows in 8 different states and 3 different countries over the past 4 years and have 5 more lined up as we speak. I’ll be seeing him next in Madison, WI, on March 22. Some good friends and I are seeing him solo in April and then Jody and I are going back overseas this summer and will see Elton 3 times in England. I’m so excited!

For you, which member of the band is (or was) irreplaceable? Miss someone, now? 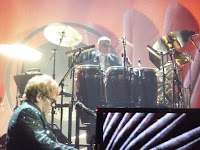 I don’t think any members of the band are replaceable, as each one is so different and extremely talented. Elton’s had several different lineups and all have had their strengths. Nobody can be replaced, but roles can be filled. I love the current lineup so much that I wouldn’t want to see any of them go. With the exception of the unfortunate and sad passing of Guy Babylon, the band has remained in tact since I’ve started seeing live shows and I’m thankful for that. I was lucky to see Guy perform live a few times and he is missed by many others and by me. Kim Bullard is doing an excellent job in the position Guy left. The addition of the girls and the 2Cellos has been very cool and exciting!

I know if I ever got to meet Elton, I would be extremely nervous but extremely excited. I’m not really sure what is left to ask him, but I would definitely want to thank him for all the happiness his music and shows have brought me and for all the things he does for humanity. I would also thank him for introducing me to great new friends that I’ve met through sharing a common love.

Which is your Elton item that you really appreciate, for being hard to get or for the happiness you’ve got by having it? 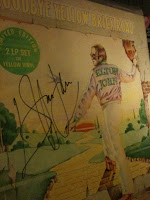 I have several Elton items that are special to me. The top three are: 1.) my "Goodbye Yellow Brick Road" yellow vinyl LP that Elton signed for me at my very first regular band show in Lubbock, Texas, 2.) my poster of Elton and Leon Russell from the Beacon Theatre debut of "The Union", which I have since had signed by Elton in Philadelphia on his birthday last year and by Leon in Milwaukee, WI, this past summer, and 3.) a personalized signed photo of him.

Wonderful! What have you done for Elton and, vice versa, what has Elton done for you?

Elton has a special place in my heart. His music brings me so much enjoyment and comfort. Elton has said many times that without the love and support and loyalty from us, his fans, he wouldn’t be here. So, what I do for him is exactly that. I attend shows when I can and support his music and theatrical endeavors. I also make contributions to the EJAF and have supported and helped out with LATWs.

What kind of place do you see for Elton John in the History of Rock Music?

Elton is a legend and will always be a legend. He’s one of the top rock piano players and has one of the best, most soulful voices I’ve ever heard. His place has been solidified.

And finally, could you tell me your five favorite Elton songs in running order, for my AllSongsList?

This is a very hard question for me to answer. Even to limit my favorites to 10 would be tough. I love so many of his songs, but 5 that will always be up there for me are: Your Song, Come Down in Time, Someone Saved My Life Tonight, Harmony and Mona Lisas and Mad Hatters.

I just want to say that the last 4 years of my life have been very enjoyable. I’ve been to so many places I never would have gone to see Elton perform and I’ve been blessed to meet so many great people through sharing a common love. Some have turned into best friends.

Oh, What do you remember about your days in Ireland, last June? 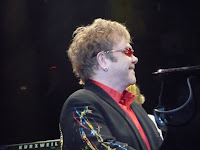 Last June, Jody Towles and I went overseas for the very first time. We traveled to both Ireland and England. We had such a wonderful time. We saw Elton and the band in Cork, Ireland, along with some very special people, fellow Eltonites: Paul, Kilian, Mary and Aine. They were so great to us and we will never forget the experience. The show in Cork was very different than in the US in that it was under a big circus tent, basically, and we were all packed on the floor like sardines for the entire show. Of course, all of us were right up front. The crowd was great! That was the show where something went wrong with Elton’s piano the very first note he played. We ended up hearing the intro to Funeral For a Friend three times by the time the issue was finally corrected! It was a great show! In England, we saw Leon Russell on his own with his band and got to meet him after the show! He was so nice and so appreciative of us and of Elton.

Thank you. Precisely, we have here two dear people, two dear friends that would love to surprise you. How could we define Jennifer as an Eltonite? So, come on, you have the word.

Paul Purcell, from Ireland: "First of all, Jennifer is one the nicest people you could ever want to meet. There is nothing but generosity, kindness and good humour flowing through her. Which makes her an ideal candidate to be an Eltonite. And because we both share this wonderful passion, this is how I came in contact with her. Which in turn led to the wonderful experience of meeting her and Jody last summer when they came over to see Elton here in Ireland. An event I will never forget. So enjoy this moment Jen, the spotlight is on you for a change!! It is an honour to call you my friend and fellow Eltonite. :-)".

Jody Towles, from Florida, US: "I must admit that In the 2 years since I've met Jennifer, I must say that her and I have grown very close. When it comes to all things Elton, she is truly my other half. We have been all over the U.S. together and we traveled to Europe on our first overseas trip. Its hard to put into words how much someone can truly enrich your life but to put it simply, she has. We've shared laughter together that is beyond compare, Two perfect understudies for a clown. She's a blast to travel with, and she has a fabulous shoe collection that rivals Elton. Thank you Jennifer for 2 amazing years and many shows. Hopefully, there will be many many more."

Paul, Jody, thanks so much for your collaboration and my best wishes for you both. You know how much I respect you, always it's a pleasure for me to be in touch. Well, Jennifer, my special guest, this your day. I have not words enough to express you my gratitude for being here, thanks so much for sharin', your time with us, it was a nice time for me to spent with you. I had so much fun, God bless you! Hope you like this song: this is for you:

Pictures courtesy of Jennifer Sundstrom
by Jackrabbit on 12:13 pm