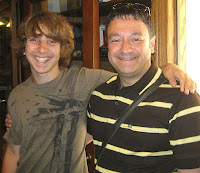 It had been a week since I’d met Ben Babylon. First reminds of that experience, are in Fred Anderson’s car, going back to the hotel. A tear round on my face and fell in my knees. It was sad someway to leave. What I had lived that day was an experience hard to explain in a few words, mostly because it was very emotional. I have to go to Miquel’s notebook in order to relate his feelings about that big date. He usually writes down his experience while travelling, pages and more pages explaining his memories about what he’s living. So, let’s start from there.

11:00
Along with Fred Anderson and my wife, Elisabet, we take the road to somewhere behind the hills. The Beatles are on the radio airwaves. Just arrived, one door opens and a smiling Kathy Babylon welcome us. It is very nice to meet her. We exchange mails several times and it seems I knew her someway, although in fact I really don’t. It’s strange how internet approach people who are a thousand miles away from each other. Some kind of magic made the dream come true and we are there. Awesome! 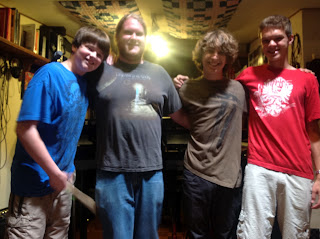 Ben’s rehearsing with his band. The first reaction is to hold him. It’s really beautiful to be there. He kindly agrees to take a picture together. Two pictures, maybe three or four, it doesn’t matter. I sit on a chair and just listen. Ben Babylon’s band was first to be a trio band, as Elton did on his Tumbleweed Connection days, comprising a bass player, a drummer and a keyboardist. You must remember those names: Alex Naylor, bassist, Alex Andrews, drummer, and Ben Babylon, on keyboards. But if that wasn’t enough, they added a guitarrist, and if Elton’s had Davey Johnstone on Honky Chateau, Ben has Brian Schwartz. Despite their youth, between 15 and 20 years old, they have so much potential and putting all together, they’re a consistent band. It seems they have been playing together for a long time but that’s not so. The list of songs they’re rehearsing are from the album, on process but with a long list of fantastic songs to choose. It’s great to see how much energy they have, and specially, how much they enjoy playing together. It’s happily surprising to see how Ben looks like his father, the unforgettable Guy Babylon, while playing: same gestures, same professionality, same passion. And more than this, what pleasantly surprised me most is how Ben’s growing on stage. The songs from the album are incredibly good, and I have my favourites of course. The first single, “Contradiction” is a winner for sure. But it was unbelievable to see when I suggested to do one song, “No Goodbyes On The Road” to him. Fred Anderson asked if it was possible to play that song for me, althought it had never been rehearsed with the band. He inmediatily said “yes” and taught the band the chords and the keys of the song. And within three or four minutes they play it. “He’s a leader” I think.

13:00
Band rehearsing is finished and band mates leave. More pictures all together. I only have to congratulate that good team, they are absolutely fantastic and nicely complement to Ben. Lunch.

17:00
Well, I now know the meaning of hiking. I didn’t know what does it meant until I was climbing up rocks and mountains in order to find a great view of landscape. And I enjoy it so much although I end up tired. A pina colada in the Malibu Beach recovers anything.

After dinner, one could be a priviledged person when you have Ben Babylon solo at the piano, for the most thrilling jam session one could expect. He explained me how much Elton and Ben Folds influenced him as a musician. And that’s really is. He starts with his own songs, before paying an amazing rendition of “Rocket Man” and “Take Me To The Pilot” on the piano. If Elton’s had his quote, Ben Folds too, when he goes to “Fred Jones”, the touching story about a man’s retiring of his job. He kindly agree to perform a superb medley between “Dreams For Sale” and “No Goodbyes On The Road”. Both songs, specially the title track, have potential enough to make a big thing. I remember it was the time when this words came to mind: “He’s special, he will do it, he has it all for success”. It was a sensation, but seeing this kid to play piano and the way he does it, you have all the feelings that it could be a possible reality. I had the same feelings as when I saw Elton on piano solo for first time: with the Band I love it, but solo, sitting on an old piano, is when the artist explodes and explores the best of his being. It’s exciting to see how much Ben loves music. Music is a part of his world. He lives for music, and music embraces him to gives his best. It’s a divine partnership, a force of the nature. And Ben has the talent enough to give music his best creations, while music could keep a place for him among his top star musicians.

22:00
The final of the jam session. I would say that it is time for goodbyes but as one of the lyrics says: there’s no goodbyes on the road”. Fred Anderson kindly returns to the hotel, not before stopping at Troubadour Club, when Elton performed for first time long years ago.

As I said in the beginning, I was sad for leaving that people behind, but I was plenty happy to see that a new star is ready to conquer the world. Sad and happy? Is that a “Contradiction”? “Big Waves Crashing Down, Shaking the Ground”. You will see, I said one day, the Number One has just arrived: Ben Babylon to reach the stardom. Give time to the artist, not in a hurry, and fasten your seat belts: the journey has begun.
by Jackrabbit on 3:57 pm