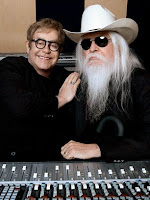 When I was approached to write a review, I was honoured by the invitation. But I was also a tad apprehensive that my first Elton album review in nearly 10 years might not sound too loyal. Well, to make matters "worse" I now run a radio station, ORLA.fm, and I get a lot of music to review for the playlist. Am I still an Elton fan? Yes. But am I going to let Elton have an easy review? No. I hope you will appreciate my honest appraisal of the new album and I thank you for reading it:

The inaugural track starts off a bit self-indulgent, as the concept of a hero-linked album might. But within 10 seconds, you realise the boys have done well to choose this as the first single from the album, which we hope is indeed the first of many.

If It Wasn't for Bad is a superb lively track which endorses the piano heavily and brings the best Elton and Leon into one song.

The second song, Eight Hundred Dollar Shoes, is a country ballad like many from Elton. Here the twist is that Elton might not have it all his own way, as Leon has something to say. Alas not nearly enough. Elton fans may extoll the virtues of this track and others but I feel it is rather disappointing that Leon's vocals are not even second fiddle. They are buried behind Elton's dominating voice. Elton, give the man a chance to sing too!

The third track Hey Ahab is a nice, well-paced track. It does not veer from the "feel" and vibe of the album. But this time introducing some fine belting female vocals too. The ending is, however, a bit chaotic....like someone crashed in on the gig.

Gone to Shiloh. Nope, I would rather go to the shops and buy this album! The fourth song has that title however, so here goes. It is a beautiful ballad which allows Leon to introduce and lead. The man still has a fine bluesy voice. And he sings in harmony "pretty good company" with Elton.

By this point, a third of the way into the album, I get the impression there is still something self-indulgent about the project. Elton has enjoyed duets over the years, more recently with the legendary French (Armenian actually) crooner Charles Aznavour. What is nice as I travel through the audio channels of this album is that Elton has not succumbed to that "let's do a jazz swing album" the way Robbie Williams, Rod Stewart or more recently Sir Cliff Richard have. This is a good gritty album so far, and I can imagine Americana-inspired lyricist Bernie Taupin must be seriously pleased with this.

Jimmie Rodgers' Dream. It has a touch of Latitude, for those who remember Made In England from 1995. For those who don't this is just a hum drum if rythmic track.

The next track is a bit heavy melodically at first. Elton has always had a panache for writing sad songs which "say so much". He is the Melancholic Master and few artists can compete with him on that. Remember the almost-tortuously sad "American Triangle"? There's No Tomorrow is a strident weeper. Lots of wailing and reflection from both Elton and Leon. Lovely guitar makes this a nice track. But would this make radio play? Nope. And not because it doesn't have the happy-go-lucky feel that much of radio requires. It simply is too heavy for a radio airplay.

Monkey Suit. When I saw this, I dreaded what it will be. First through my mind went the account I remember Clive Franks gave me about the time in 1972 he had to wear a Crocodile suit on stage during a U.S. gig for "Crocodile Rock". But once the track starts playing, I think more the 1960s hit (not from Elton) of The Monster Mash. This a nice rocker, and I think it could work on radio nicely even if the title of the fun song is a bit absurd. Well, it's more Strongest Suit for me than Big Man in a Small Suit. Well done Elton and Leon!

The Best Part of the Day is best part of the album. A superb ballad that gives both singers equal footing and brings the best out of their vocals. I would definitely place this on our playlist if it is released as a single, or even if it is not. There is a touch of “This Train Don't Stop There Anymore” so I am easily won over to this bluesy track. Contains a nice piano bridge which has Elton written all over it.

A Dream Come True. Does anyone else sense a touch of ELO's “Don't Being Me Down” in this track? It is a tub-thumping recital which we can dance to. But like many dance tunes unmemorable – if you excuse the ubiquitous “Lambada” from 1989!

When Love Is Dying. It's always a bit dangerous to compare a new song to someting you have heard, although every fan does it. This particular song is reminiscent of “We All Fall In Love Sometimes” and the latest recording seems, from the title, like the sequel. It's a fabulous broad ballad. We would have a song like that on late night airtime. Very satisfying track. It may not make a single, but fans should thank the boys for bringing this one to our ears. I can seriously see Elton doing this song as a solo in concert. Perfect.

I Should Have Sent Roses. We have all been there, when we regret we didn't handle a situation or a gesture better. But the song is flat. It does nothing for me, like a wilted Rose.

Hearts Have Turned To Stone. It is like I Should Have Sent Roses. It does nothing for me, alas.

Oh yes, Never Too Old (To Hold Somebody)

The final track is The Hands of Angels. Rightly Leon is given the stage for this track and he appears to be enjoying this as Elton accompanies him on piano. But it is a filler song, something to close the album. Maybe with time it will grow

Elton is singing this album taking account of his years. He might enjoy producing Scissor Sisters but Elton is more at home now with this genre of music. In terms of album theme, the songs are cultivated from the same style. I would say that is perhaps the album's main drawback – nothing on the album is experimental. Nothing stands out as different. Even if some of the songs are indeed better than others and a few are already on my favourites list.

In terms of the production, it is difficult to tell because the sound was from a legal online vendor. I would rather reserve judgement on the sound of the album until I hear it on CD.

George Matlock is the news editor of ejw.com and he was Hercules UK manager and commercial affairs manager between 1993 and 2001. He mastermind many of the products which made Hercules a brand name, and which helped to accelerate the introduction of eltonjohn.com official website. He has been a professional journalist since 1990, and worked in public relations. In 2006 George launched his own anglo-polish radio station, Radio ORLA for the UK, Ireland and Poland (www.radio-orla.com/en)
by Jackrabbit on 1:05 pm

Etiquetes: Committee Of Experts, Four Of A Kind