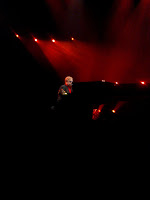 "(She) packed my bags tonight, pre-flight". Well, I am not the only one for sure, but everytime I go to an Elton John concert, this open line comes to mind. And that's it. It was the first concert of the year and it seems that would be the last one. Well, this time it was not a travel by airplane but by train, something called "AVE", about three hours from Barcelona to Madrid. "Elt" (my ipod) came with me this time, always important an Elton atmosphere hehe. 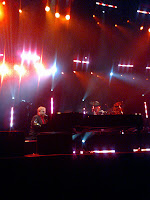 When I arrived to Madrid, the first thing should have been to go to the hotel, to leave the packages, but Jack Rabbit ran to the building event. It was about mid day, and a few people was there on a cue. It's funny, I've met some eltonites on facebook but never seen them in person, but it seems we are more than collegues. There was AGR82 (great Antonio), AnnaBcn, Enrique from Madrid, Andreas and Mariona (wonderful couple), other people on a row. We began chattin' about Elton, concerts, collectable items, everyhting very important for an eltonite, until I realized that I had the packages with me and it was not appropiated to bring them on concert, for sure. So I left that on the Hotel. Then, hours and hours waiting. More people joined with us: Philip from Germany, Alberto from Asturias (Spain), Laura from Madrid and at the end, Julio, from Galicia too. About 7 p.m. it was announced that they will open doors, so it was time to prepare physically, for the running I would say. The doors went opened and I run as I never did on my life (Jack Rabbit running throught the woods? fuck off! Thank God I did not break nothing hehehe). But it was a worth effort: first row, in front of Elton and his piano.

I sang on every song of the concert (excuse me friends from Madrid who were at my side) and Elton looked at me some times and laugh (yes, people, I put all my sentiments on there). Oh, it seems ridiculous now but hey, on a middle of a concert, there's no time for thinking. 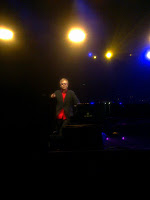 Elton was in a good form, better than ever. He enjoyed the show, people was so receptive to him, we screamt "Elton, Elton" so many times and he also kicked the piano as a way to tell us, "Hey, I am rocking". He began congratulating Spain for being the winner of the soccer World Cup and explained every song as usual. On "Philadelphia Freedom" I was "I love you love you love ya" and at the end of the song, he standed and pointing at me he said "Yes I do". God, my camera went on the floor (fortunetely the picture was taken).

The emotion was perceptible when he started "Funeral For A Friend", a sign that the great Ray Cooper was to come in. We guessed a shadow waiting his turn and hey, that was incredible. That's a great character, a great performance. A bald stature with dark glasses, tie and braces (thanks Google!), but hey, he didn't stop never ever: tambourines, congas, vibes, xylophones, bells, etc., God knows how many instruments he was playing. It's nice to see the songs only for piano and percussion, they're great songs "Indian Sunset" was superb, including the intro with only voice, then the piano and finally Cooper's playing. Two songs from "The Union" were performed: Elton played "You're Never Too Old" and then, with Ray Cooper, "Gone To The Shiloh", a song on the category of "Tumbleweed Connection". 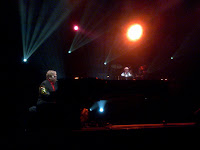 For audience rejoice, he mixed "Daniel" with "Song For Guy", "Bennie And The Jets" with "In The Mood" and "Take Me To The Pilot" with "Y Viva España" (Long Live Spain) from a local singer called Manolo Escobar. That's incredible, someone taught Elton obviously. That song, played on the piano as part of "Take Me To The Pilot", is a kind of anthem for spanish audience, a song composed in 1973 that became very popular, also in the soccer stadiums (not one of my favourites though). Then he signed items for us (after 20 fucking years waiting, I've got mine) and he closed the concert with the Lion King. 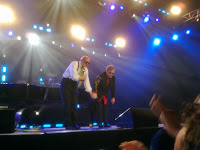 A night to remember for sure. After the concert, some eltonites went to dinner, me too (giantic coke, you understand me guys), and finally, on the way to the hotel, I went to the building again. There, people from Elton's team chatted with me (well, me with them), they invite me a coke (thanks!) and they were so kind with me. They told me Elton was not very well yesterday, but, hey, seeing the performance result, nobody could tell that again. He spent the night in Madrid, that's true.

This morning I went to the Train Station to go home, remembering how important for me is Elton's world: music, fans, Elton himself. A way of life, someone told me that this is a kind of philosophy; well, maybe that's true. Jack Rabbit back home again, maybe I should take a look at next concerts. That's a way of living!!!!!!!!

Circle of Life / Can You Feel The Love Tonight

Finally, it was not "Original Sin" on the list (Ouggggghhh) but how "Carzy Water" rocks. An incredible song, an underrated song, but a fabulous live song.