"I am Elton, I am an alcoholic" told Elton to the presents while he was attending Alcoholic Anonymous meetings in West Hollywood, California. It was not until he formed a passionate relationship with a young man in 1990 that he began to identify the problem. His lover, too, was addicted to various substances, and suggested that they both sought help. At first Elton violently resisted the idea. But finally, on 30 July 1990, he agreed. For initial therapy, the pair were asked to make a list of each other's key faults. His lover's read: 'Elton does drugs, he's alcoholic, he's bulimic, he has terrible fits of rage.' Elton's began: 'He never puts his CDs away tidily. 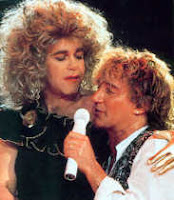 Elton joined a surprised Rod Stewart on stage at Wembley Stadium as an pril fool's joke by Rod's management. Wearing a black and gold frilly dress, stockings, high heels and a blonde wig, he sat on Rod's knees while he was singin' "You're In My Heart", and he served brandy from a silver tray. "My left leg has never been the same" joked a surprised Rod. 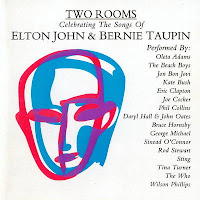 A tribute album of cover versions of Elton and Bernie compositions, "Two Rooms", was released. The title refers to the song on Elton John's album 21 at 33, "Two Rooms at the End of the World", to the duo's unusual collaborative style, and is also that of a 1991 movie documenting their collaboration. The album gained an uneven reception, with Sinead O'Connor's interpretation of "Sacrifice" generally receiving the most praise. Kate Bush's reggae-inflected version of "Rocket Man" was released as the lead single and peaked at #12 in the UK and #7 in Australia. The second single was Oleta Adams' version of "Don't Let the Sun Go Down on Me", which peaked at #33 in the UK charts. Wilson Phillips' cover of "Daniel", while not released as a single, peaked at #7 in the US Adult Contemporary chart due to strong radio airplay.

Elton introduced a BBC TV tribute to Freddie Mercury who died of AIDS the previous night. Two days after, he attended the funeral at the West London cemetery in Kensal Green. "I will love you always." Elton's message was pinned to a massive wreath of pink roses shaped as a heart. The note added: "Thank you for being my friend." Elton gave John Deacon a hug and kissed Roger Taylor. Tears streamed down his cheeks as he walked forlornly to his green Bentley before being driven off.

Elton began collecting photography and since then has acquired nearly 2,000 superior quality photographic prints. He has built his collection during the past ten years, and it is distinguished by its exceptional quality and remarkable range and depth. The collection primarily comprises vintage 20th-century black-and-white photographs with an emphasis on portraits, fashion and floral subjects, and it is especially notable for its strong concentrations of early modernist and Surrealist works.
by Jackrabbit on 3:16 pm