Bernie Taupin released the RCA album "Tribe", named displaying his affinity for the Native American culture. It was co-wrotten by Martin Page, who also collaborated "We Built This City" with Bernie for Starship. The songs on the album featured "Corrugated Iron", dedicated to Nelson Mandela, he duetted with Martha Davis on "She Sends Shivers, and it was also nice to hear Elton John's voice on "Citizen Jane" and "Billy Fury."

Elton John underwent surgery to remove nodules from his vocal chords and forced to cancel all 1987 performances including a U.S. tour. 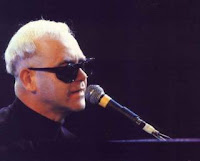 Elton was the special guest at the International AIDS Benefit Concert at Wembley Arena, London, and performed "Will You Still Love Me Tomorrow" and "I Guess That's Why They Call It The Blues". It was the first live show after his operation.

Elton was part of the Prince's Trust concert. He was invited along to an extended jam session – the band featuring the likes of Mark King on bass, both Ringo Starr and Phil Collins on drums, Elton on piano, and both George Harrison and Jeff Lynne on guitar.

Elton appeared on the NBC series Totally Minnie performing a track. The film featured an original music video with Minnie Mouse, in new animation, integrated into live action footage with Elton John singing "Don't Go Breaking My Heart". It was the first film to feature Minnie Mouse in the lead role. The animation for "Totally Minnie" was provided by Filmfair, a British company who had provided animation for the television series "Huxley Pig", "Junglies" and "Nellie the Elephant".

Elton John joined George Harrison and Ringo Starr as they shot a promotional video for "When We Was Fab", from George's Cloud Nine album.
by Jackrabbit on 6:17 am