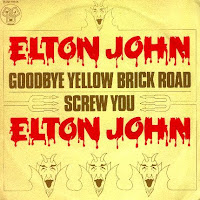 "Goodbye yellow brick road" found Bernie plundering imagery from the first film he had ever seen: the 1939 movie The Wizard of Oz. In the film, Judy Garland as Dorothy has been transported by a tornado from Kansas to Munchkinland. She has to follow the yellow brick road to the Emerald City, where she will find the wizard who she must ask to help her get home.

In the case of Bernie, the yellow brick road led him from his country village, Lincolnshire, to the big city, London. London represented the Emerald City: the road of excess, the superficial world he and Elton lived, with outrageous costumes and trademark spectacles. "When are you going to land?" it's a way to advertise Elton from this unreal situation. Bernie feels dissapointed: "I'm not a present for your friends to open". The line "You know you can't hold me forever" is his answer. "There's plenty like me to be found", his solution. Like saying: find another and let me escape from this!