Eltonite's Day: Ladies & Gentlemen, the one and only... directly from Crazy Water Forum... Herci II!!!!!

Well, this is the last Eltonite Day of the season. There are several forums on the website world, and eltonite's are making great friendships. It's like a family, one know each other. I must to bring on some very special guest. I knew her in the Crazy Water forum. I always like her thoughts and comments about Elton, and I am sure we gonna have a great time chating a little about our idol...

So thank you very much for the acceptation, really a pleasure to have you... Could you tell us, please, who are you and where are you from?

I was still a kid around the MTV Unplugged show and I remember watching tv with a friend of mine. Suddenly we saw the show at MTV. I was about 8 years old and had no idea who EJ was. 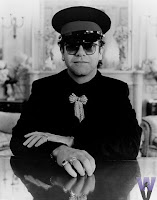 I was magnetised by his performance but my friend wasn't. He started making fun of him because Elton used to pull funny faces during solo's. He changed channel. I still didn't know who that guy was.

I was drawn to his name around 93 when I saw the cover of duets in a store. I wanted to know who Elton John was. (still had no idea) But I couldn't buy the album.

Then when the Lion King was released I heard Circle of Life and asked my mother who went on a trip to London to buy the Love Songs album. I had seen a competition on tv to win the album and that's how I knew who sang it and that is was on that album.

She came back with it, I listened and every song sounded familiar, I was an instant fan at the age of 13. It was like it was ment to be.

I like his voice in the 90's, it sounds really warm...So that is my favourite era.

I've seen him first when I was 16. It was the big picture tour. The sound in the venue was awful, but it was my first concert and my first Elton concert. I was thrilled.

I have lost count, but seen him about 2 times with band, 2 times solo and once on a festival, I think. The last one was the festival 2 years ago. He said something, that wasn't supposed to be heard...the mic was on. Something like, festivals suck, and I knew it would. It was hard to understand though. The audience did suck. I think he played madman, I love that song. But on festivals people want to hear the hits and a lot of the crowd just walked away halfway. And missed the hits at the end. (daft ****s)

I have written him a letter once (years ago) to tell why I liked his music so much and included the Believe booklet. I got it back signed, 3 months later, including a letter from his management saying it is hard to get his signature because he is always so busy...but I was lucky. I still left the post-it note on it...saying : Michèle Belgium.

Nice! And which songs do you think Elton should add to his current set list, and what would it be life if Elton suddenly played a song that he has never played live? And your favorite live songs to be on? And, for you, which member of the band is (or was) irreplaceable? Miss someone, now?

I sometimes got a bit bored when I heard extremely famous songs live, such as sacrifice, blue eyes... It has no added value to me live. I don't play cd's with those on it anymore. Just got tired of hearing them too much.

I prefer long piano solo's as in Bennie and the jets, Honky cat and especially Rocket Man. I also love his version of I heard it through the grapevine from the Russian tours.

Sometimes lesser known songs don't sound so great if he doesn't do something special to them. I remember him playing Hercules and I didn't like it as a fan. And most people who don't know it start talking during those kind of songs.

Maybe Davey is irreplaceable? He's been there so long.

I did like the gospel choir on his peachtree tour.

How it was, and still is, the success of Elton in your country? Which have been his hits in sales terms? And which are belgians' favorite Elton's albums or songs? How it was the impact of 'Just Like Belgium' single in 1981, in your country? And could you still hear Elton's music in the radio, nowadays? 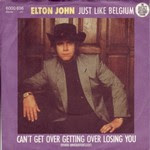 I'm only 26, so I don't know about the succes in the 70's or 80's... nor the Just Like Belgium thing. I have no clue about that. But I don't think Elton is popular in Belgium now. Not even in the 90's. I remember I had to look extremely hard to find certain albums. Singles were a total pain in the ass. In the last 10 years it was impossible to find his singles in the shops. I remember hearing I want love on the radio and you just couldn't find the single anywhere. Hence no chart notation. I think it was all due to very bad promotion tactics from the record company and it still is the same way. His albums and singles haven't been promoted since the Big picture. The whole Lady Di thing sold well, and then the Big picture sold quite well...but that was it.

So no new songs on the radio. Of course the classics are sometimes played on those classic hits radio stations. But he sure isn't popular.

In fact he has a bad/distorted image with a lot of people, being gay, overweight, the clothes, bad press...People only talk about the tabloid stuff...but even that is often hardly reported.

I have to tell ya, I checked out your blog about music. That's on http://yourpaintedsmile.blogspot.com/ In truth, I really like it and find it so much recommendable. What were your intentions to start up a blog like that and what we could find there?

A year ago I started working in a cd/dvd store on saturdays and holidays. (extra job) I'm a total music freak and have more than (lost count) 1000 cd's. So that's heaven to me. The pay is bad and it's hard work, but I get to lend things from the shop, so I see new movies every week and can hear practically every new cd that's out. And I also like movies, mostly something in between art movies and the blockbusters. Some blockbusters are good, most are not that great. I do like certain artmovies too, if it's not too arty farty.
So I suddenly started thinking I might start a blog about those things. Because often people come up to me for advice in movies and music. Some friends always wonder where I get such great music/movies from. Especially when some groups are not so well known I find it fun to recommend them. By example the soundtrack from My Blueberry Nights is an unknown gem. Also the latest works from John Mayer are really good. Actually nobody knows him in Belgium, which is a shame.

You can also find other stuff on the blog, I had a competition recently where you can still vote for. I sometimes recommend other websites which are fun or interesting. Things where you go aaaaahhhh that's nice.

If anyone want to recommend anything you can always email me.
It's just a fun thing...I always like to try new things.
But you are limited, because you have to be very careful with image rights. So I don't want to get in trouble and I use no pictures I find on the net. Otherwise it would be a lot more fun.

Wow!!! Which is your Elton’s item that you really appreciate, for being hard to get or for the happiness you’ve got to have it?

I don't have any really special things. I do treasure his autograph I got. You can even see it on a recent post on my blogspot. (http://yourpaintedsmile.blogspot.com) Also more info on how to get one.

I do have a bunch of bootlegs too. Played them a lot when I was younger. The MSG concert cd's you got when a member of his site are very good. Tantrums and tiara's on vcd... was fun to watch and hard to find.

Otherwise nothing special here. I used to freak out on stamps and silly goodies when I was a teenager, now I only wonder why I bought these things... Got quite a lot of books too... they are just lying around gathering dust now. The freaky years are over and I have broadened my taste of music. Next to Elton there is Bryan Ferry. (and about 100 other artists I like)

1) Rocket man (the LIVE LONG version) - that really really long version of 11 minutes or so he plays...that is magnificent.
2) If the river can bend. (like the gospel feel)
3) believe (great voice and video)
4) simple life (just a cool arrangement)
5) madman across the water (live in australia)
5 and a half) durban deep /stones throw from...

This is hard, Rocket man live is one. The rest is just stuff I really like. He has so many songs.

I have plenty of suggestions, they are all on my website... haha.
http://yourpaintedsmile.blogspot.com

Yeah, an observation... There isn't a single live album where you can hear every song played at the concert. I see this often with other artists too. They just take the hits, mix them up and place them on a cd. WE NEED THE WHOLE THING! Not some shortened versions.
That's why I liked the MSG give away. Elton should release something like that.

Or make another album like The One, Made in England, the Big Picture or Sleeping with the Past. Maybe I'm strange but I don't like his latest stuff.

He can always do a collaboration with Bryan Ferry too..

Oh, You are a primary school teacher, are you? How about your students? Are the new generations interested in Elton? Is there any subject about Elton's music?

Primary school (age 6-12) kids have absolutely no idea who Elton John is. They are more interested in crappy kids music. Or stuff like Crazy frog and Tokio Hotel. I ban these things from my classroom. Makes me sick. They like Mika too, they can play that. Last year I started playing things like U2, Bryan Ferry and Chris Rea during drawing classes. They also had no idea who they were but they liked it and even asked for more things like that.
So I might take Elton to my classroom once.

But they are so used to hear the horrible manufactered things that they find normal music funny?? They sometimes start to laugh. But they do think 50 cent is cool... Hell no.

Hahaha!!! Thanks a bunch Michelle for sharing this time with us. I really enjoyed. Take care.