The Story Behind "Slow Rivers" 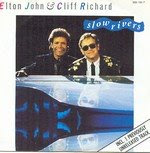 As Liz Rosenthal described in her “His Song” book, Bernie analogizes a dying romance to a sluggish river “Slow rivers run cold, shallow waters never sank so low” and a frigid winter “I still see your eyes tonight like headlights through the fog”, as the prisma of a well-schooled in failed relationships could experienced.

When he introduced the song in the “Live In Australia” Tour de Force, he joked about the gigantic economic effort to bring a full orchestra to play live and tour with him, so they couldn’t have Cliff Richard to duet with him.

When “Slow Rivers” was in the music charts for a month, with bad results, Elton was admitted in a Sydney’s private hospital to remove a non-malignant lesion in his vocal cords. Elton was persuaded to not speak for a week and not to sing for months.
by Jackrabbit on 10:43 am