Lee Hall, a playwright and screenwriter, was born in Newcastle in 1966. His acclaimed play Spoonface Steinberg (1997), a monologue for a nine-year-old autistic girl dying of cancer, was first broadcast by BBC Radio 4 in 1997. He was nominated for an Oscar and a Bafta for Billy Elliot (2000).

Lee Hall had never expected to end up working on a musical when he started work on the film seven years ago: "I thought I had written a very personal and peculiar piece about growing up in the North-east and about wanting to create art against all the expectations of my background," he said.

He looked close to disbelief when he recalled his childhood self sitting writing in his bedroom and listening to Elton John records: "The whole thing has come full circle and in a real sense is a dream come true," he added, and explained: "I get the call from Eric Fellner at Working Title that Elton would like to speak to us. He has apparently recovered from his viewing of the movie, only to declare that he'd like to make it into a musical". It was 2001 in New York, when they finally met: "He has been looking for a British subject to make into a musical since the early 1970s and he thinks he has found it in Billy Elliot. So many of the themes strike a chord with Elton's own life - right down to attending the Royal College of Music as a young prodigy at the age of 11. Stephen and I have a pact that we'd only do it if the other commits and so we sign up for it". The only issue was who would write the lyrics, because Lee asumed that Elton would want to bring on Bernie Taupin, but not, Elton surprised him by insisting that Lee should do the lyrics: "I go home in a state of elation and panic" joked.

Because of Elton's schedule, they decided to write the songs first and then do the "book". "At one in the morning, I am woken by the phone. To my surprise it is Elton" remember now Lee."I think he must be so upset he wants to fire me before I waste another day on this stuff. But instead he plays me the first number down the phone. It seems fully orchestrated and everything I'd imagined it to be". 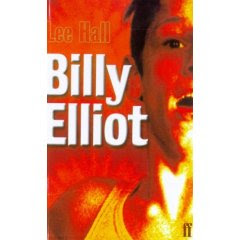 Lee's method begins writing by dreaming up the story first in images; Next, he normally make some notes and then take a huge piece of paper and free-associate what the essential scenes will be (in Billy Elliot a kid who dances in the streets of the mining village, the confrontation with his dad) and then draw lines between the different scenes and plot how they will connect up.
by Jackrabbit on 2:42 pm