The Story Behind "The One" 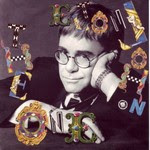 “I honestly feel this is our best strong work for a long, long time” confessed Elton. “It’s a fusion of Bernie and I being in the same place at the same time, happily and spirituallity”.

The album celebrated the sober and clean return of Elton after a year off from recording and touring. The years of drugs and alcohol were gone and Elton looked younger with his &14.000 hair wave and started wearing dresses designed by his new friend: Gianni Versace. Bernie, for his part, was newly in love with a restaurateur from Los Angeles, who became his third wife: Stephanie Haymes.

Altough the first day of recording, pressure overcame Elton and left the studio after twenty minutes of the starting, he returned the next day and wrote music to the Bernie’s lyrics, most supplied by fax.

As Liz Rosenthal describes in “His Song” book, “The One” sounds “like a love affair everyone would want to have, while illustrating the simple joys of spiritual rebirth”, from the beginning of a relationship, with a promise fullfilled, to the acceptance of a fresh perspective.

“”The One” is a powerful song” explained Elton on the beginning of the 1992-93 World Tour. “The lyrics sort of describe my life-style of the past and present: “Each man is his time is Cain, until he walks along the beach” are two of my favourite Taupin lines because they apply to me, and to him too. We’ve done our walking along the beach now and we’re both happy”.
by Jackrabbit on 1:10 pm