The Story Behind “Are You Ready For Love” 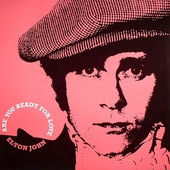 After the success of “Philadelphia Freedom” Elton talked to do a Rythm & Blues album. He loved the sound of The Spinners and The Stylistics. Producer Thom Bell, who helped mold the Philadelphia sound was asked. “Let’s see exactly what he wants to do” remembered Thom. “He said he want to do something he doesn’t done before: he doesn’t want to do anything. I said: Ok. What is it that you don’t want to do? I don’t wanna do anything (again). He said I want you to be the boss of the whole thing. (And said) “I won’t give you any lip”. And he did not change, he stuck to the plan”.

The sessions had nearly been completed when The Spinners were brought in for backing vocals. But Elton was dissapointed when they scrapped half of his vocals on “Are you ready for love” and because he founded “overproduced the album and the orchestration too sweet”.

Finally, singles were released and “Mama Can’t Buy Me Love” earned a Grammy’s nomination for Elton and became a Top 10 hit in the U.S. Although “Are You Ready For Love” wasn’t a chart success, in 2003 was used as the commercial of the soccer campaign in a British Channel and became a number one hit. Elton “Suddenly some disc jockey picked it up and a label called Southern Fried, owned by Fatboy Slim, put it out and became a huge dance and huge commercial success” said elton with satisfaction. “I am so glad for Thom Bell because I really enjoyed those six tracks with him and they still sound great now. It was great to phone him up and find where he was and say, “You’ve got a number 1 single in England, well done!”. Thom’s answer was: “Man that’s amazing. That was 27 years ago. I think we were a little soon, but at least, we let the world catch up to us”.

Elton explained later that Thom convinced him to sing in a lower register.

(transcriptions from “Dream Ticket DVD”)
by Jackrabbit on 12:50 pm