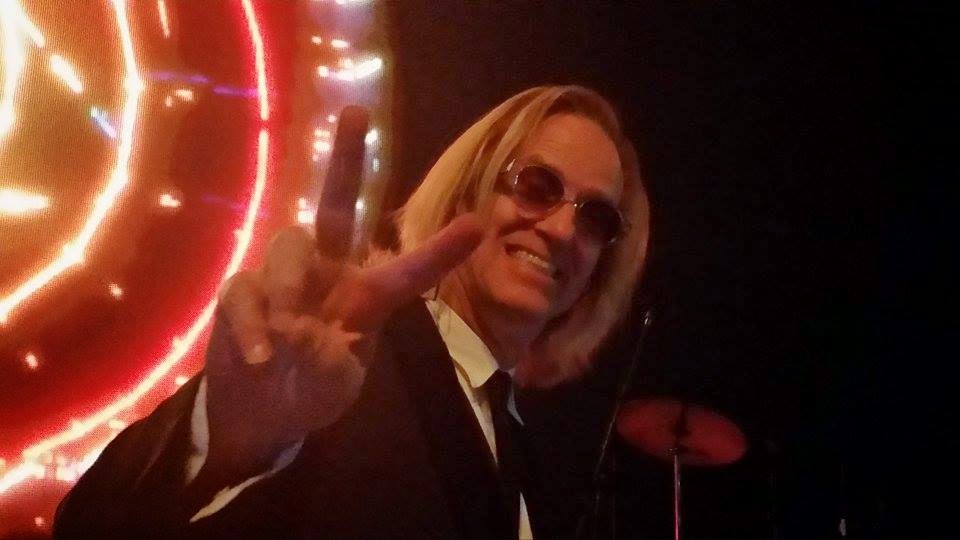 This is Kim Bullard's guest book. There are several eltonites who, after the interview with Bullard, send me their pictures and thoughts about him, so we were agree to make it public. One thing is obvious, Kim Bullard  has conquered the hearts of fans with his kindness, passion and professionalism. So there's a taste of comments sent to Jack Rabbit about our guest, in the past days. Feel free to send whatever thoughts or wishes you have for him, just to show how much we love him. Thanks so much for your collaboration. Eltonites, this is your time. 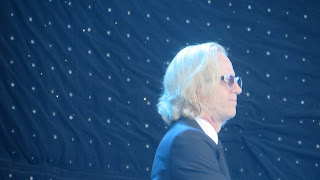 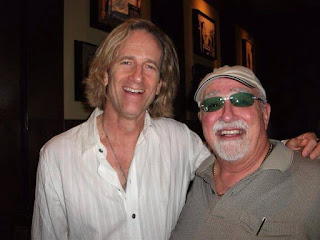 "Kim Bullard,a fine genuine person and a great musician. This photo was at the Elton John LATW in Las Vegas,Nevada. It was a pleasure meeting you.You have filled in beautifully into the Elton John band. All the best wishes for continued success" (Richard Georgeou, USA, 88 concerts, since 1970) 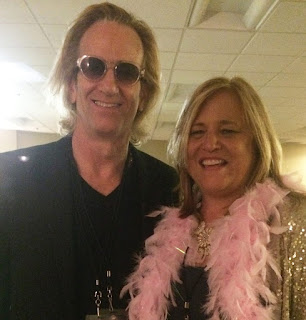 "I've had the privilege of meeting Kim Bullard in person twice now.  First, at the Elton Expo in Vegas in October 2013, and most recently, before my 43rd Elton John concert in Jacksonville, Florida. I've always had great respect for him, and I have a special place in my heart for piano and keyboard players. What a gracious (and might I add very handsome) man! In Vegas, I introduced myself as "I'm a Kim, too" and he high-fived me. He signed my GBYBR CD, so I now have all 5 of the current touring band members' signatures on that same CD.  A prized possession! In Jacksonville, he gladly took a photo op with me, signed my tour book and we chatted for a few minutes. (Burn Down the Mission is his current favorite song to play.  Glad they added it back to the set list)! Since then, I found out his daughter (Katy Rose) was born on January 27 - same day as my son! Thank you, Kim, for your graciousness and for all the years of amazing music! Hope to meet you again sometime soon" (Kimberlee Kemble, USA, 43 concerts, since 1974) 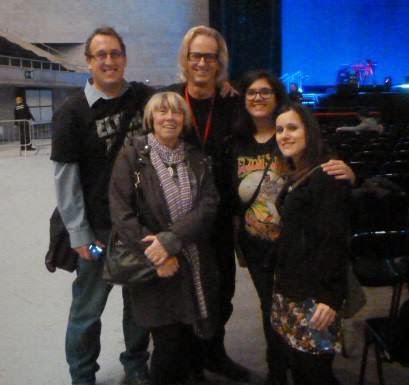 "Anybody who has ever heard FFAF/LLB knows what a demanding synthezizer piece it is. Kim Bullard has managed to reproduce it perfectly live. Using several complex electronic sounds at once, the audience is blown away every time it hears this. He arrives from out of the smoke on stage.  In fact, Kim is often the one who starts the shows, since this piece is often the opening number. Alice also gives Kim, along with Davey, the chance to add unusual sounds. Now with more string drama towards the end, the song is more exciting than ever. However, he also has an ear for Elton’s more melodious music. The soft strings you hear in the background in ballads like Tiny Dancer and Your Song make the songs sound soft and smooth. Elton’s music is so varied that for a keyboard player’s point of view, it’s like working for ELO, Carole King and Scissor Sisters at the same time. Some of my favourite playing of his is in The Blues. He has completely made the harmonica solo his own at the same not forgetting the original solo by Stevie Wonder. Kim adds to the magic but never overplays. He interacts with the band from his platform and often poses for a smile or laughs with other band members, at the same time as he’s delivering the goods. We have been very lucky to have met him twice in person. He was so kind to take some time with us and share our Elton experiences. Both times were awesome as he really seemed to enjoy the fans company as well and we couldn’t be more pleased. We are completely overwhelmed to attend our very first show in The Colosseum in Vegas this April. An event we never would have imagined. We can’t wait to live this experience with Elton & The Band" (Mariona Calafell, Spain, 31 concerts, since 1997) 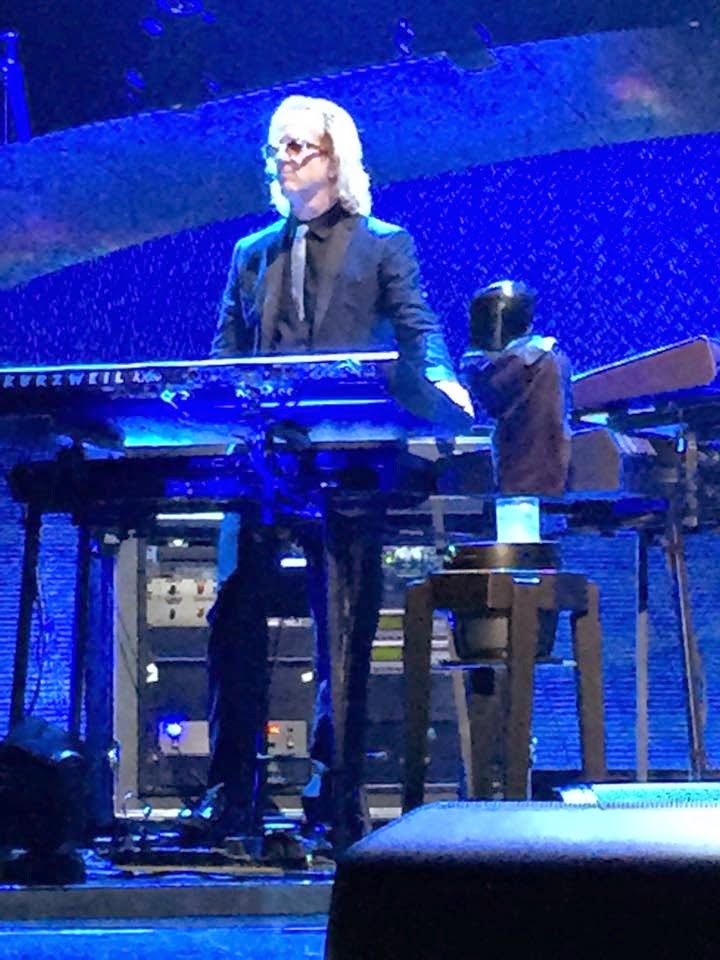 "Picture was taken at Fayetteville, North Carolina on March 11th by my good friend Tommy T Baughman. Please let Kim know that I am a big fan and I'm sure he knows who I am from seeing me at the front at UK concerts! I'm looking forward to seeing him and all the Band this summer" (Ros Dinsdale, UK, 40 concerts, since 1973)

"Kim is a SUPER nice guy !!! I had the pleasure to meet him a few times... He is a lovely man and during this years he has become a precious member of the EJ's Band! Can not wait to see him again in italy this Summer" (Silvia Corsaletti, Italy, 35 concerts, since 1993) 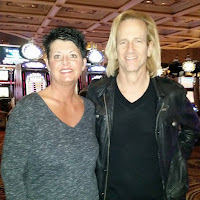 "I met Kim this past January and had a wonderful time just chatting and hanging out. He's so down to earth and easy going and so fan friendly....so lucky to have had the chance to meet him...." (Jennifer Keller, USA, 10 concerts, since 1980) 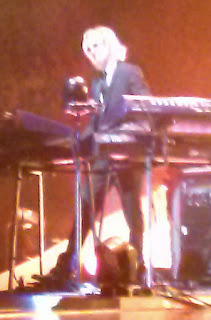 "Kim, you are a keyboard wizard! The way you've mastered "Funeral For A Friend" is just incredible. I am so happy and thrilled for you that you joined the band! When I saw you with EJ and the band in Denver on 9/20/2014 from the 3rd row, I felt the vibrations beneath my feet! Even more so at the front of the stage. (I wore the flashing blue sequined hat.) It was great seeing you enjoying yourself, having realized a dream. I have friends who have met you and say how nice and cool you are, and always happy to take a picture with them. I admire your humility and kindness when it comes to meeting fans! I am hoping to get to Vegas for the show on 4/14 (there is a free front row ticket and hotel for me; all I need is airfare and I'm there! !) Wishing you many blessings and much happiness, always". (Stacie Purcell Pearson, USA, 50 concerts, since 1970) 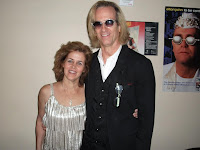 "I had the opportunity to meet Kim twice. Once in 2011 and the other time was in 2013 at the Elton Expo in Vegas. I cannot say enough good things about this man. He is very personable as well as professional. He took the time to chat with me. When I spoke with him, I informed him that I am a gymnast. I shared with him that I am using Elton’s music for my gymnastics routines". (Missy Gymns, USA, 10 concerts, since 2002) 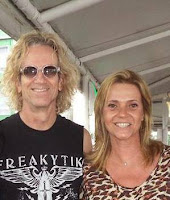 "Besides being an outstanding professional who gives a special color to the repertoire of Elton John with your fantastic keyboard, Kim Bullard earned his place at EJ Band definitely with talent and charisma. And just like all his band mates, he's always very friendly with all the fans. I wish Kim all the success. He deserves!" (Vera Lucia Piovesani, Brazil, 5 concerts, since 2009) 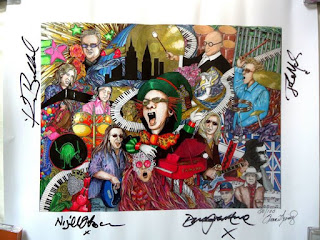 "Since Kim joined the band he has kept a steady line between keeping the integrity of Elton's music intact and stamping his own personality on it. Because he 'gets' Elton's music it's no chore for him to carefully navigate the myriad of colours that Elton's music has conjured up over the years. Whether it be Synth strings, Moog, Hammond, Fender Rhodes and all other keyboards in between. Even though Kim might not wear a cape he's still got the versatility to keep any man awake! See what I did there... like all his colleagues in the band he's a terrific ambassador for Elton and his music. Both to the common man on the street and most importantly, the diehard fans. I can't wait to hear him on the new album later this year!!" (Paul Purcell, Ireland, 12 concerts, since late 80s) 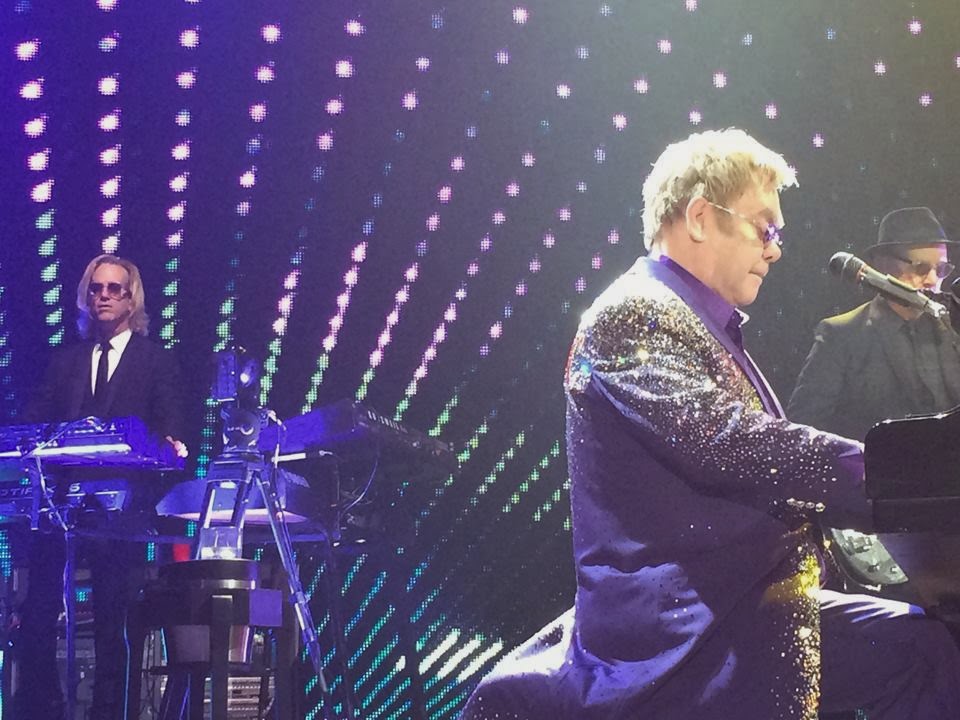 "Hello from Italy, I look forward to see you live in Italy this summer and to hear the new Elton album featuring your work for the first time ever...I'm sure it will be a success!" (Andrea Grasso, Italy)

"Would love if you could tell Bullard how much I love the band and his playing. He's a genius, and I'm looking forward to the summer, in Bergen, Norway" (Inge Alexander Simonsen, Norway, 7 concerts, since 2008)

"I have been a diehard fan of Elton's band members since ever since. Since I was a kid, my dream was seeing Elton playing with any member of the band. Kim Bullard is part of the impeccable sound which I will feel eternal devotion. A musician worthy to be part of my loving Elton's band. Thanks for existing" (Mayra Fuentemayor, Venezuela, 1 concert, since 1974)

"Hi Kim and Katy Rose, I never got to see you play with Elton yet. I hope to someday soon, I enjoyed reading your articles and learning a little more about both of you. Take care........... (Jim Oksen newloneranger, USA, 7 concerts, since 1980)

* Intro picture by the greatest Jennifer Keller, USA, she took the picture of him after leaving the stage, after Elton finished SNARFF at The MDP show. How appropiated for the intro of the article. Thanks so much Jennifer. (Jack Rabbit)
by Jackrabbit on 11:39 am