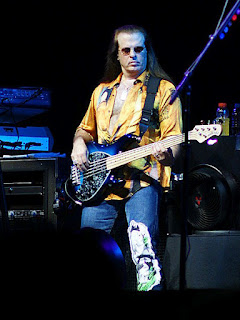 I couldn't believe it when I read Elton John website's news: "We are very sad to report the sudden death today of Bob Birch, Elton’s bass player and backing vocalist, in Los Angeles". Born Robert Wayne Birch, he was 56.  Los Angeles police report that Birch's body was found about 1 A.M. in a suburb of the city and is being investigated as a possible suicide. He leaves behind his wife Michele and Jonathan, an adult son.

Over the years, Bob Birch has amassed a prodigious amount of credits, both in the studio and live: Leon Russell, Stevie Wonder, Tina Turner, José Feliciano, The Captain and Tennille, Sting, Eric Clapton, just to name a few. But he was mostly noted for being Elton John's bassist since 1991. Although he majored in the bassoon and music education while attending Wayne State University, his passion and devotion was with the bass guitar. "I started playing instruments at the age of 8 "he reported to AllSongsList, when a weekend was dedicated to him. "My influences were all great jazz artists in America: Charlie Parker, John Coltrane, Miles Davis, Bill Evans, Scotty LaFaro, (...) 70's melodic rock is an education in itself. That's when I discovered Elton John and many other artiss of the time that wrote and performed their own compositions". He joined Elton's band through Davey Johnstone and friend Guy Babylon: "When Elton came off the road in 1990, I met Davey Johnstone through Guy and we started to work on the Warpipes record". When Elton wanted a new bassist player for his 1992 World Tour, Davey recommended him. Always professional, it is well remembered Bob Birch performing from a chair in 2009, due to suffering a back injury. Speaking about Elton's music precisely, he said he didn't "remember the first music I heard of Elton's, but I was always impressed by the songwriting and piano playing". Also "the production and string arrengements always got my ear". Asking about favourites he confessed "I would like to play Blues For My Baby And Me".

Friends like Jay Bolan explained remarked about him how "amazing musical talent he is, outstanding ear and sense of music in totality, he loves to rock especially Zep or Van Halen". Composer Marc Bonilla said he could "count the number of friends on one hand that I have that are both superior musicians and true people of character, dependable to the end, and Bob Birch would top that list". Bandmates remember him, like John Jorgenson: "he was a fabulous musician and a dear and loyal friend" or Bill Trudel: "he was so funny and witty, and one of the best bassists I had ever heard".  Bernie added to his website this beatiful words: "Death leaves a heartache no one can heal, love leaves a memory no one can steal". And Elton made his statement too: "He was one of the greatest musicians I have ever worked with, and in all our years on the road he never played or sang a bad note. I cannot find the words to describe this tragic death, and how much I loved him".

Rest in peace, Bob Birch, we eltonites won't forget you never ever. This is such a terrible day today and you will be so missed.  You will be in my prayers and this song, your song, is dedicated to you. Doesn't matter the way you died, the fact is that we have lost one of our idols, and that's so sad. Don't know much, but I know I love you, that may be only what I need to know. Thanks for your music and your legacy. A big hug and all my support to the Birch loving people.