One of the most innovative fashion designers of the 20th century, and known for his glamorous styles. He has also created stage costumes for such pop performers as Elton John, Madonna and George Michael. Versace was shot in front of his Miami Beach, Florida home by Andrew Cunanan, who had crossed the U.S. on a killing spree. Elton sat next to Princess Diana at Gianni Versace's funeral: "It was a very emotional day for me, because Gianni and I were extremely close. As soon as I saw her, I breathed a sigh of relief, even though I was with David, who's my partner. And we were like, "Oh, God, thank God you're here," you know? When I started crying, she put her arm around me and she comforted me". Elton dedicated "Abide With Me" and "Live Like Horses" to his friend. 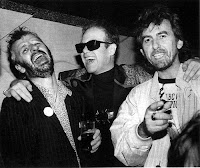 Harrison was a fluent, inventive and highly accomplished rhythm and lead guitarist of The Beatles. All Things Must Pass and the accompanying single "My Sweet Lord" had the distinction of being the first solo recordings by any of the Beatles to top the charts following their breakup. In 1997 Harrison was diagnosed with cancer and had throat surgery; he finally died years later at a friends home in Los Angeles. Elton explained that when he first came to the U.S., and his self-titled album was No. 18 on the charts, Harrison sent him a congratulatory telegram: "I've never forgotten that gesture. It was such a mind-blowing gesture," he said. He then dedicated a performance of "Your Song" to Harrison "for all the wonderful music he's given us over the years. Wherever you are, George, be happy. God bless you." 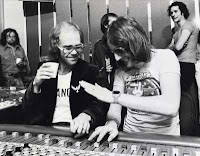 Dudgeon was an essential part of Elton's team on a dozen albums, seven of which reached No. 1 in the U.S. He had worked in the 1960s as an engineer for several major British acts of that decade, including the Rolling Stones, John Mayall's Bluesbreakers, David Bowie or the Moody Blues. Gus and his wife, Sheila, were tragically killed when their Jaguar XK8 veered off the M4 motorway while they were driving home. Speaking at Dudgeon's funeral, Elton described his friend and former mentor as the "the greatest producer of a generation". His moving tribute gave way to tears when his song "High Flying Bird", which Dudgeon had produced, was played out to the packed church. A note attached on a bouquet of white lillies from Elton read: "Thank you for the glorious times. May you be in Heaven together forever, love Elton."

Guy's first performance with Elton was for a benefit at the Century Plaza Hotel in Los Angeles in July 1988, and his first world tour as part of the Elton John Band began two months later in Miami, Florida. Guy became lead keyboardist on May 26, 1992. He died of a heart attack while swimming in the pool. Elton, who was unable to attend Guy's funeral, posted on his Web site a tribute to his longtime music colleague and friend: "I am devastated and heartbroken at the death of Guy Babylon. He was one of the most brilliant musicians I have ever knew, a true genius, a gentle angel - and I loved him so much," he wrote. In Naples, Italy, Elton dedicated the whole show to Guy's memory: "This has been the saddest week in my life. The keyboard player in my band, Guy Babylon, died last week. I want to dedicate this show to him. I love him so much! This is the saddest thing in my life". 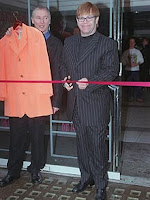 In the mid-1970s he joined Rocket Records, co-ordinating all the star's record releases and personal appearances. For many years he managed Sir Elton's households in London, Windsor and Nice, overseeing extensive building projects. He was appointed director of the Elton John Aids Foundation in Britain in 1993. Under Key's direction money has been provided for more than 500 programmes in Africa, Asia, South America and eastern Europe. Robert Key died of myelofibrosis following a bone-marrow transplant. "Robert's vision and commitment to the fight against AIDS inspired me to establish the Foundation" wrote Elton, "He will be deeply missed but felt everywhere in our goals and our achievements. Robert, we love you".
by Jackrabbit on 6:04 am