Issued in the U.S. on Southern Fried/Ultra, "Are You Ready for Love" jumped to Number 1 on the Billboard Hot Dance/Club Play chart . Since this chart was introduced in 1976, Elton has never topped the tally until now. "Are You Ready for Love" was Elton's biggest Club Play hit since April 1994, when a remake of "Don't Go Breaking My Heart," with RuPaul peaked at No. 3.

"The Heart Of Every Girl," written for the Julia Roberts movie "Mona Lisa Smile," was nominated for a Golden Globe award, but it didn't win. 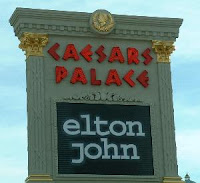 After opening his show "The Red Piano" at The Colosseum at Caesars Palace, Elton John joined Caesars president Mark Juliano to tour the construction site of the resort's new 949-room tower and autographed a special yellow brick which will be added to the support structure of the building which is set for completion in 2005. The signing was sparked by a recent human resources campaign in which Caesars Palace associates were invited to sign their names on cement bricks which are to be sealed in the support structure of the new tower. 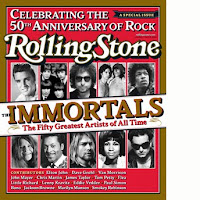 50 rock stars are enshrined in "The Immortals" the first of three special issues of the Rolling Stone to commemorate the 50th anniversary of rock 'n' roll. Elton John appeared on #49 (article written by Billy Joel). He has also written the piece for Stevie Wonder who is on #15.

Ray Charles died June 10, 2004 at his Beverly Hills home from complications relating to liver disease. He was 73.
"The death of Ray Charles is an incredible loss for the world of music. He inspired so many people and his music will live forever," said Elton.

Cocker spaniel Arthur, so well trained, he knows when Elton's about to finish a concert and sits at the edge of the stage waiting for him. A member of support band Scissor Sisters revealed it. 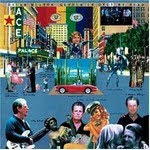 Elton sang four of the 17 songs he's composed for Billy Elliot and announced that - after a warm-up stint in Newcastle in November 2004 - the musical would open at the Victoria Palace Theatre March 11, 2005. The songs were "Electricity" (Billy's description of what it feels like to dance), "Expressing Yourself" (about a cross-dressing friend of Billy's), "Grandma's Song" and - the big final anthem - "When We Were Kings," where the miners head to the coal mines as Billy goes to the capital.

"There's an atmosphere of fear in America right now that is deadly. Everyone is too career-conscious. They're all too scared," Elton declared to Daily Telegraph, on the headline "Elton attacks new 'era of censorship' in America". And added: "In the 1960s, people like Bob Dylan, Nina Simone, The Beatles and Pete Seeger were constantly writing and talking about what was going on", he said. Now, "hardly any are doing it . . ." The era of protest songs by major artists was long gone. "That's not happening now. As of this spring, there have been virtually no anti-war concerts - or anti-war songs that catch on, for that matter." 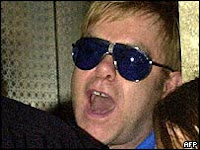 Elton John launched a fresh attack on Taiwan’s media, saying the photographers and TV crews at Taipei airport were the rudest he had met in his pop career. "Rude, vile pigs!" he shouted. "Do you know what that means? Rude, vile pigs. That's what all of you are." One of the photographers shouted back: "Why don't you get out of Taiwan?" Sir Elton replied: "We'd love to get out of Taiwan if it's full of people like you. Pig! Pig!"

Elton and the band performed a special promo show at MTV Italia in Milan promoting the new album, "Peachtree Road".

Attending the Q Awards to pick up a prize for his songwriting, Elton was incensed to find Madonna had been nominated for best live act. Taking to the stage, Elton blasted: "Madonna - best fucking live act? Fuck off. Since when has lip-synching been live? Anyone who lip-synchs in public on stage when you pay £75 to see them should be shot."

Elton and David made a joint announcement saying they would be one of the first to make use of the Civil Partnership legislation: "We feel, however, that any relationship that has lasted for as long as ours deserves such recognition, protection and respect."

The second edition of the ROLLING STONE 500, a celebration of the greatest rock & roll songs of all time, chosen by a five-star jury of singers, musicians, producers, industry figures, critics and songwriters, selected the following Elton's songs:

An unfinished track from the Caribou sessions, "Ducktail Jiver," would be finished and included as a bonus on an upcoming SACD reissue of the 1974 album. Davey Johnstone added guitar to round out the recording.

The Guinness British Hit Singles and Albums book ranks artists every year according to how many weeks they have spent in the UK singles and albums charts. Elton was number 6 on the Top 10 acts, with 1.615 weeks.
by Jackrabbit on 3:40 pm