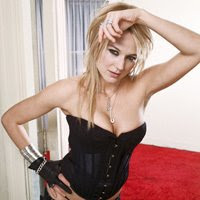 Jewel Kilcher was born May 23, 1974 in Payson, Utah. Jewel grew up on an 800-acre homestead with her parents and two brothers. They had little in the way of modern conveniences; there was no television and the bathroom was an outhouse. She spent much of her free time writing in her journal, writing poems, and singing. At age six, she began singing with her parents in dinner shows in local hotels. Jewel never had a single guitar lesson. She taught herself, and watched other people who showed her a chord or two or a riff. At 15 she applied to a fine arts school in Michigan, called Interlochen, and was accepted on a partial scholarship. Soon she started performing at the Innerchange, a coffee shop in South Beach around 1993. Jewel was signed to Atlantic Records close to her 19th birthday. Her first record, a deeply introspective, live, voice-and-acoustic-guitar, modern folk collection called Pieces of You, sold about 3000 copies, nearly all in San Diego. Her debut poetry collection in 1998, A Night Without Armor, quickly became a mainstay of The New York Times bestseller list, with 29 printings and a remarkable million-plus copies sold. She has received three Grammy Award nominations and has sold twenty-seven million albums worldwide, and almost twenty million in the United States alone. Jewel was among the famous fans who attended Elton's Madison Square Garden Birthday.
by Jackrabbit on 12:55 pm