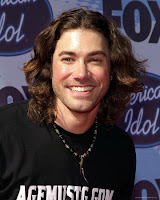 Brett Asa "Ace" Young was born on November 15, 1980 in Denver, Colorado. Young, who has been singing since the age of nine, attended voice lessons and performed at local shopping malls and recreation centers during his youth.[5] He performed at various venues in Colorado and other western states, most notably at the Pepsi Center in Denver. Young graduated from Fairview High School, his local high school, in 1999, having participated in athletics, choir, and International Baccalaureate classes during his school years.

He was contestant on season five of "American Idol". He received a GRAMMY NOMINATION for his co-write on DAUGHTRY's first single "IT'S NOT OVER". He referred to Elton as the one of his biggest musical influences growing up.
by Jackrabbit on 10:35 am

Ace Young was, is and always will be my favorite American Idol.
I've met him several times and he is a beautiful person inside and out. He not only sings like an angel, he is an angel.
I could listen to him sing for days, heck, I could listen to him talk for days. lol
He actually saved my life.

As for Elton John, he is a genious. I have always loved his music and he is one heck of an entertainer.

Nice coincidence, Debbie. I am a fan of Ace Young too. Thanks for your comment.