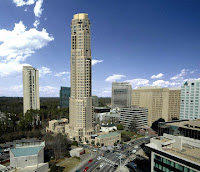 One of America's best known streets, Peachtree winds north from downtown Atlanta through the heart of Buckhead, closely following the Chattahoochee ridge route of the Indian-era Peachtree Trail. Downtown, it's Peachtree Street, but after it merges with West Peachtree and heads north, it becomes Peachtree Road. 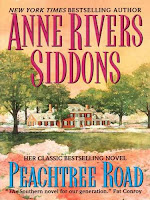 Some of Atlanta's grandest churches, such as the Cathedral of St. Philip, are on Peachtree, as well as some of the region's glitziest shopping centers: Lenox Square and Phipps Plaza. Writers have always found Peachtree irresistible, and it's almost a character in Margaret Mitchell's "Gone With the Wind" and Anne Rivers Siddons' "Peachtree Road." One of the city's most recognizable skyscrapers is the Westin Peachtree Plaza hotel, with a cylindrical design and all-glass exterior. Atlanta's Hard Rock Cafe is across the street, at Peachtree and Andrew Young International Boulevard.

About the origin of Peachtree Road name, it all started in the 18th century, according to Donald Rooney, a curator at the Atlanta History Center, when an Indian trail emerged along the route. It started as a raised land ridge that was convenient to natives seeking a high observation point during floods. "It can be debated if Peachtree was actually named for a peach tree" Rooney said. "Peach trees were not indigenous to the area." Historians speculate that a large peach tree might have grown at the site of a military fort once anchoring the route. Others theorize that Indians used a pine tree there for resin, also known as sap or pitch, and called it a "pitch tree." 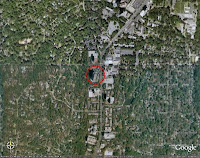 Scotty Greene, president of the Buckhead Community Improvement District, said to atlantapaperintown.com that Peachtree is "exploding." "The evolution of this is what’s interesting," he said. "In 1997 there was one tower...then you had the classic Wakefield [Peachtree and West Paces Ferry] and Elton John’s building [Park Place] and the one across from The Peach [The Phoenix] and now that stretch all the way to Peachtree Battle will have more modern-day projects – the new urban ecology."

Elton has 1 1/2 floors in the Park Place building. His entire photography collection is placed there. He fell in love with the city when he went to do some recording many years ago. He has said Atlanta is the only city in the world where he can just live a normal life because the locals pretty much leave him alone and are not overly impressed by his celebrity.

Paul Diaz owns Tree Sound Studios in Norcross, located just 20 minutes from Buckhead. Around Diaz on the wall are albums by artists who have worked with Tree Sound Studios, including Usher, Backstreet Boys, Trey Lorenz or Elton John. Elton John's "Peachtree Road" album was recorded there.
by Jackrabbit on 1:56 pm

Thanks so much for this really interesting information! I thoroughly enjoyed reading it, even the part where PeachTree Road may not have been named after a peach tree! Keep the blog going, I like to read it a lot!

Thank you very much for your kind words, Bradley!!! I am glad you like it :-)