Ladies & Gentlemen, get up to receive the fantastic, incredible... TheFox!!!!!!!

Being an elton fan, I have the opportunity to meet great people, from different countries. I always recall how much eltonites know about Elton: about his personal life, his successes, his songs, ... It's always an enrichment feeling. Now, we have one of those eltonites who know so much about Elton. He help me in the article of dutch music charts and he's a great people. Welcome TheFox, nice to have you here. It's always good to chat with you and I am glad you be my guest on the eltonite's day of Holland...

I am Wim Greven and I live in Holland in a place called Emmeloord 3 metres below sea level. (Can you imagine?)
It’s called a polder. For 50 years ago it was a sea and they build dikes around it and now It’s dry land. It’s a agricultural land, potato fields and also flowers fields in April and May)

Nice country, really!!! When did you became an Eltonite? Remember the first time you heard Elton's music and what moves you to buy his music?

For the first time I heard Eltons music was in 1976 when I was 11 years old.
It was on a holiday in Sweden. It was of course “Don’t Go Breaking My Heart”. Nice catchy tune.
But I became a real fan of his music when I heard Song for Guy on the radio.
Such a moving melody. BTW I never understood why this melody wasn’t a success in the USA.
But when I bought one of my first LP’s it was a collection of Elton John hits. Strange but I heard then (1981) for the first time Your Song. I did already know Sorry seems to be.
And after playing those great songs again and again, you start to collect all his music.
In those days it was not as easy as it is nowadays. Every music store I went in to I look for new Elton stuff. 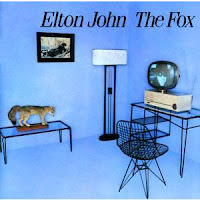 Beginning with his latest work than “The Fox” I was impressed by his classical piece of music “Carla/Etude”. But also his duet with France Gall “Donner pour Donner” impressed me much. The way the saxophone goes into the voice of France Gall is so perfectly done . When I bought this single I could not sleep.
I had to go out of my bed to listen with headphone this song everytime.
Every album of Elton I captured in my heart, It’s been a part of my life.
Blue Moves is one of my favourite album of Elton.

Great!!! What was it like seeing Elton for the first time and how many concerts have you been? And also, could you tell us if you ever have been in touch with him, get a signed autograph or even, speak with him or with other member of his band? 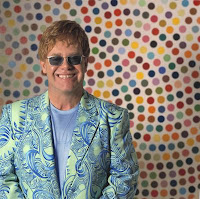 I saw Elton 4 times. 3 times in Holland and 1 time in Belgium.
In Holland I had always one of the best places at his concerts first or second row
due to one Elton fan who had a good connection with the organisation of the concerts
in Holland.
I have a signed autograph on a tour book and one autograph on the single Song for Guy.
Unfortunately I didn’t speak Elton or any band member.
From those concerts I was mostly impressed by his solo concert in 2000.
He played 3 hours without any break. Fantastic! What a great artist.

And which songs do you think Elton should add to his current set list, and what would it be life if Elton suddenly played a song that he has never played before? And your favorite live songs to be in? And, for you, which member of the band is (or was) irreplaceable? Miss someone, now?

I hope if Elton would add more album tracks to his current set list instead of only hits.
I would like that he add Belfast, Basque, Sweetheart on Parade and You gotta love someone (he never played this songs live but these are really great compositions) and some tracks from Blue Moves like Cage the Songbird, Crazy Water or Idol. But I am very unsure if this will happen one day?
By the way I miss Ray Cooper! My favourite concert he played with Elton is Live At The Greek in Los Angeles in 1994. This was a concert full of less famous and less frequently live played Elton songs.

How it was, and still is, the success of Elton in your country? Which have been his hits in sales terms? And which are dutch’s favorite Elton's albums or songs? And could you still hear Elton's music in the radio, nowadays? And which should do Elton's next step in his music career?

Although he had his biggest successes worldwide in the seventies he became more well known. In the Netherlands after his huge success with Nikita. I think it peaked the dutch charts for 7 weeks at # 1, it never happened before in the dutch charts with other artists.
Yes you hear still Elton songs on the dutch radio.
I think Elton made in the 90’s a big step to go more in the direction of to compose great music
without only a commercial success. Albums like “Made in England” and the last three albums are a good example for this.

I got from another fan a mirror with the cover of Captain Fantastic and The Brown Dirt Cowboy printed in it. But simply listening to his music and see him perform live. (also on dvd) gives me enough satisfaction and energy.

What do you think about news of Elton going to studio again for a 2009 album? What type of album would you expect? And the record's company release of more DeLuxe editions, without forgetting an special box of Elton's duets and rock numbers, and so on?

It’s always nice to hear new work of him. Maybe he will work for the first time not live but in the studio with Billy Joel.
I prefer more special boxes with rare Elton demo’s of his songs.
(the release of more live shows, no parts but the complete concert)

Oh, once you said: “Elton is still standing and he makes music on his albums nowadays that he likes!! (and I like) and that's better than any Chart list at this moment. But he needs also a hit that's true”. So, what type of song needs Elton to climb the music charts, as he did?

He needs to compose another great ballad I think Just Elton and his piano.
When I listen nowadays to great songs for example to a artist like
Adele – “Make You Feel My Love”
I think Elton could wrote it, but I am sure he will make another smash hit again!

(as you can see ballads are my all time favourites)

Good choice, thank you. Would you want to add some observation or suggestion, or something you want to say to other eltonites?

I hope Elton will make more new albums in the future and continue to perform live (also in the Netherlands! because we miss you )and I hope to meet more Elton fans one day from many countries.

Ok, thank you very much for sharing your time with us, Wim. Really a pleasure to chat with you, an enjoyable experience. Take care my friend.
by Jackrabbit on 3:38 pm