The Story Behind "Something About The Way You Look Tonight" 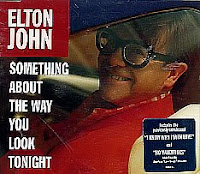 If that was a great period for Elton, for his relationship with David Furnish, Bernie was in trouble with his third marriage, that ended soon after the album's release.

Lyrically, the song was one of Bernie's best, for lines like "But in the moonlight / You just shine like a beacon on the bay", what the great reviewer Jim Turano define as the "most lazy lyric of Bernie's career".

Recently Elton dedicated live this song to his partner, David.
by Jackrabbit on 5:28 am