The Story Behind "Children Of The Revolution" 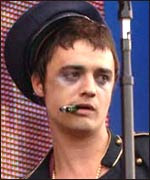 When Elton joined Marc Bolan in 1972 to this T-Rex classic, couldn't imagine that another version, this time with rebel Pete Doherty, from Babyshambles, would be his worst ever duetting performance. Not for Elton, who sang an energetic performance, but for Pete's erratic behaviour.

Dressed in an Edwardian military cropped jacket - like those favoured by The Libertines in their early days - and heavy Marc Bolan-style eye make-up, and introduced by Elton as "the new talent", Pete Doherty delivered the most infamous show. Reviews called the performance "terrible" Elton John has since blamed it on the singers nerves. Doherty blamed it on Bob Geldof's daughter Peaches: "Just before I went on stage, she whispered something rather suggestive to me. It left me in such shock I didn't know where I was...".

Elton told The Daily Telegraph: "We rehearsed it and it was absolutely tip-top, but on the day he was really nervous. He's a mess. It's really sad." Elton added: "I don't think the people around Pete set a good example. But you know he had his chance to do it. At least he looked great!"

George Michael, for his part, said: "I don't know Elton was hoping to achieve by doing a duet with Pete Doherty at Live 8. It was almost like it was Doherty's duty to be wasted and stumble about on stage".
by Jackrabbit on 1:37 pm