David Furnish was born in Toronto, Ontario, Canada on October 25, 1962. His father, Jack, was an accountant of Bristol-Myers and Gladys Furnish, his mother was a homemaker. David graduated in 1981 from the Sir John A. Macdonald Collegiate Institute in the Scarborough Region of Toronto. He graduated from the business program at the University of Western Ontario in 1985. He worked in a middle management job at the advertising agency Ogilvy & Mather in London's docklands.

A mutual friend of Furnish and Elton John left a message for Furnish inviting him to a dinner party at Elton John's house on October 30, 1993. Initially fearing that the dinner would be unpleasant, or that John would be boring, he instead found John to be interesting and engaging. Both were attracted to each other; John asked for his phone number and the two had a private dinner the following night. Within a few weeks they were attending a film premier together.

David resigned from his position in 1994 after finding it increasingly difficult to balance the position's demands with the demands of his new life with Elton. Elton proposed to David in May 2005 at a dinner party with friends and family at their home in Old Windsor. "I've always considered myself committed to Elton and he's the person that I want to spend the rest of my life with. So in that sense, I don't feel like the dynamic of our relationship is going to change" David had said about his partner. On 21 December 2005, they entered into a civil partnership. 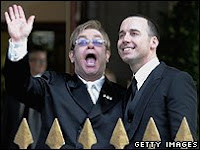 On the actual day, a low-key ceremony with their parents, photographer Sam Taylor-Wood and her husband Jay Jopling, and John and Furnish's dog Arthur in attendance was held at the Guildhall, Windsor, followed by a lavish party at their Berkshire mansion, thought to have cost £1 million. Superintendent Registrar Clair Williams and Registrar Peter Edwards were the officiates for the ceremony. Their parents were at the small ceremony and acted as witnesses. They took their parents to lunch in a black Rolls-Royce after the ceremony. "Meeting David has been the greatest thing to happen to me. Yes, we spend a lot of time apart and it's hard, but we make it work".

With a keen interest in film, Furnish enrolled in courses at the British Film Institute. He is currently co-chief of Rocket Pictures along with Elton, and he's a contributing editor for Tatler magazine and also a regular columnist for Interview and GQ. Currently, he serves on the board of the Elton John AIDS Foundation, attending fundraisers and other events in support of that cause. Elton and David set up the company Rocket Pictures and David began to make films. His first project was "Tantrums & Tiaras" which was a warts-and-all fly-on-the-wall documentary about Elton John. It was nominated for a Bafta award in 1996.
by Jackrabbit on 10:43 am