Thank you!!! by Jack Rabbit 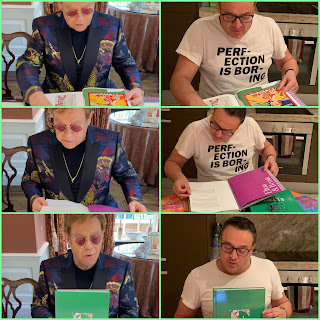 Finally the date comes!!!! Tired of dozens of hit albums in recent years: the greatests, the diamonds, the definitives collections, love songs, ... eltonites we were waiting for so long to have a box set like this fantastic "Jewel Box", a true gem. First attempt to compile Elton and Bernie's work was in 1990 with the "To Be Continued" box set, 4 cds with the hits mixed by deep cuts and "B" singles as well: a good taste. "Lady Samantha", in the early 80s, compiled the "B" sides of his most successful singles, and also it was "Rare Masters" in 1992, another treasure in Elton's discography. But the hungry record companies back then, were only interested only in hit songs by popular singers, trying to stop the decreasing album sales around the world. Nowadays, internet and the music in stream, allows to select more their projects with good and well prepared editions of material, where the presentation is also more accurated and LPs is more relevant than the years before, maybe because collectors and fans are more exigent about what we will buy, and, as a certain point, we preferred to spent more money if what we bought is most value. So, someone heard our prayers, and if we had to wait 30 years to have another box set collection, "Jewel Box" fullfill our dreams.

To have in our hands the early work of Elton and Bernie, some of them published sometime as the Dick James Demos, is such a blessed. Some of the titles were well known, but not their tunes. If you mixed that with the release of "B" sides until 2005, is the ice on the cake. But what is the most expressive effort and it's justice for Elton and Bernie's artwork, is a collection of masterpieces compiled by Elton himself, the deep cuts, that songs that were not exposed to public, only in some of the live concerts throught the years, but as good as to show how Elton only can be Elton himself, no copy to try. Bernie's intelligent lyrics, the story teller like no one else in the music star firmament, is also unreplaceable, althought some good attempts by Gary Osborne and specially Tim Rice. The combination Elton (music) and Bernie (lyrics) hand in hand are Elton John. If you added such talented guys like the lates Gus Dudgeon or Paul Buckmaster, and the most effective band like Dee Murray (bassist), Nigel Olsson (drums) and Davey Johnstone (guitar), all backing vocals too, you understand the success of Elton John and why they all have their place in the music history.

To review this fantastic box set, I asked to one of my master expertise, the one that is a reference to me: "Elton" Jim Turano, from Chicago. This man is so amazing, is one of my influences related to Elton. I discovered him reading his articles in the not forgotten East End Lights magazine, at the time that only you could find information about what you liked, and that's Elton John, related to his music, not his flamboyant costumes or his massive singles sales, for that we had the music pressed (not to mention the yellow press). So Jim kindly agreed to do his review for AllSongsList readers, so I thank him by heart. Soon we will have more surprises about the fifth of a kind.

I would love to thank Liz Rosenthal too and giving my public support to her. She always is gentle to AllSongsList and in future we will collaborate for sure. Liz, if you were reading this, I love you so much and wish all the best to you, you know what I mean.

So, let's start with Elton Jim. We we'll have more articles in near future... don't miss how Jack Rabbit met Bernie Taupin in 2018 and share his time with his idol, and don't miss a new project called "38 minutes" related to Kathy Babylon and Holly Doubet, that a BIG BIG thing in development. I promise to dedicate a week to this.

Thank you eltonites to join AllSongsList again, it is a long time since I was a step apart sseing and helping growing my daughter Júlia, a gift of live and a new eltonite in development, as anyone of you could expect hahaha

Hope you like the List again and thank you eltonites for being there. It is a joy always being in touch with you and enjoying time with some of you in live shows when I had the chance to meet you. I feel so honoured to have such good friends who love Elton's music: our passion since the day we'll die.