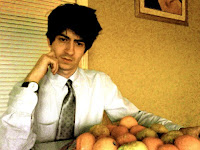 Nathan Carr Gaston was born January 30th, 1988 in Decatur, Alabama (USA) to Tony and Sherry Gaston (parents). Nathan's parents divorced when he was only 2 years old in April 1990. He moved to Florence, Alabama (USA) in August 1992 at the age of 4 and a half when his mother remarried and he has lived in Florence, Alabama (USA) since then. Nathan received his first piano from his dad when he was 4 years old. A Kimball spinnett piano. He quickly taught himself how to play piano by ear at age 4 listening to a lot of Elton John songs. Nathan took piano lessons briefly from age 8 to 10 but quickly became better than his piano teacher; he wrote his first original song at age 11.

Nathan graduated from Florence High School in June 2006. He is currently working on writing and recording new music and attending college at The University of North Alabama (UNA) in Florence, Alabama majoring in music and business management. Nathan has a part-time job as a teller at a local bank while attending college and makes extra money on the side doing solo piano shows in local restaurants.

He's a very talented piano player, prolific songwriter, producer and arranger. He has written over 200 original songs and he knows at least 700 cover songs by other artists including Elton John, The Beatles, Paul Simon, Paul McCartney and Billy Joel to name a few. Nathan recently wrote and recorded 10 original songs on music row in Nashville in an attempt to try to get a recording or songwriting deal.

His very first music video of a song called "Walking Together" was relased to You Tube on December 18, 2010 and has done very well so far. The video was shot by a guy called Mokavich in Nashville who has done a lot of work for the Zac Brown Band recently and has been shooting a documentary with them on their world tour.

That's a brief bio of someone who I truly believe has the potential to make a lot of people very happy with his music. So, welcome to the weekend, the weekend of... NATHAN GASTON.
by Jackrabbit on 2:53 pm