Searching For Elton's Wax Figures Around The World

Hi Eltonites. I remember when I went to London years ago, how much I loved to see an Elton's wax figure at Madame Tussaud's Rock Circus. I reminded this when the other day I was looking at old pics I've kept in my Elton's box. Wow!!! It was the first time I sat at Elton's side on the piano, singin' the characteristic "B-B-B-B- Bennie And The Jetssssssssss". It came immediately to mind the following question: how many Elton's wax figures exists around the world, in the wax museums? So, I took old Jack Rabbit for a mission: looking for Elton's waxwork figures. That's what he could find. Enjoy the trip around the world: Old Rabbit Eltonin' Around the World. Yeah!!! 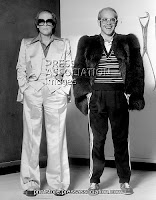 In 1976, March 7, Elton John's first likeness was added to Madame Tussaud's waxworks in London. He is the first rock figure so accorded the honor since The Beatles were first immortalized in wax back in March 1964. Madame Tussauds is the most famous wax museums around the world. It was set up by wax sculptor Marie Tussaud. Marie Tussaud (1761–1850), born Marie Grosholtz in Strasbourg, France, worked as a housekeeper for Dr. Philippe Curtius, a physician skilled in wax modelling, who taught Tussaud the art of wax modelling. Tussaud created her first wax figure, of Francois Marie Arouet de Voltaire, in 1777 and she established her first permanent exhibition on Baker Street in London in 1835. In 1842, she made a self portrait which is now on display at the entrance of her museum. The museum moved to its current location on Marylebone Road in 1884. In 1925 a fire destroyed many of the figures, but the moulds survived, allowing the historical waxworks to be remade.

On 2 July 2005 two major events occurred: Elton performed at the Live 8 concert in Hyde Park, London, and Madame Tussaud’s unveiled his wax likeness, which had taken over 1 000 hours to complete. Stroll through the glittery music room, where Jimi Hendrix and Elton John are right around the corner from Frank Sinatra and Michael Jackson. Also, a life size chocolate figure of Sir Elton had been made to celebrate Cadbury's Centenary. 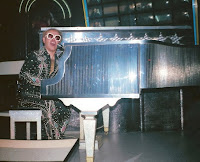 "ROCK CIRCUS IS WHERE THE SPIRIT OF ROCK
SPEAKS TO YOU, SINGS TO YOU, PLAYS FOR YOU, MOVES AND TOUCHES YOU". That sounded interesting! The attraction featured authentic hand casts from over 50 artists, running from established stars like Phil Collins to the up and coming like D Ream and Let Loose. Seated on his piano, beside Stevie Wonder, Elton's wearing one of his stage costumes from 1973. It was once home to a famous cinema and the venue for many star studded premieres. The Beatles made their last public appearance there at the 1968 premiere of 'Yellow Submarine'. Unfortunetely, The Rock Circus exhibition closed in September 2001. In 2000, the building became part of the Trocadero Centre, and signage on the building was altered in 2003 to read London Trocadero. 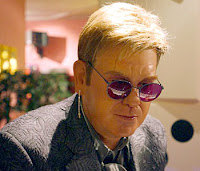 Louis Tussand was the great grandson of Madame Marie Tussand. He created this waxwork museum which is quite similar to the Madame Tussaud’s museum and is situated in Blackpool. You could join the stars of rock and pop in the Rock Factory and have a go at playing the drums or guitar, listening to the hits, including classics from greats such as Elton, Elvis and Freddie Mercury and most recent chart toppers, Robbie Williams and Madonna. In April 2011 the waxworks will re-open when it becomes the next member of the ultimate celebrity attraction brand of Madame Tussauds. 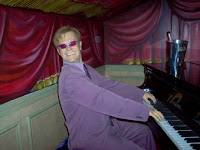 At the end of the 19th Century, Arthur Meyer, a journalist and founder of the famous daily newspaper Le Gaulois, conceived the idea of showing his contemporaries 3D representations of the front-page celebrities in his newspaper. At a time when the press did not use photography he thought of creating a place where the public could at last “put a face” on the people in the news. To achieve this original project, he called on Alfred Grévin, who was a cartoonist, sculptor, and designer of theatrical costumes, and who became so involved that in the end, the project bore his name. When the Grévin opened its doors to the public on 5th June 1882, it was an immediate success! The museum now contains some 300 characters arranged in scenes from the history of France and modern life, including a panorama of French history from Charlemagne to Napoleon III, bloody scenes of the French Revolution, movie stars, and international figures such as Albert Einstein, Mahatma Gandhi, and Pope John Paul II.

The first Wax Museum in Prague was opened at Rapid Palace in March 1997. Due to the huge number of visitors from home and abroad, a second museum was opened in 1999 near Karlstejn Castle and a third museum in 2001, at Ceský Krumlov. In 2002 the Wax Museum opened in Mostecka Street. In the following year they moved from Rapid Palace to be more centrally placed in Melantrichova Street. The renovation of the Melantrichova Street premises in 2003 provided the opportunity to divide the collection between the two Prague Wax Museums; Mostecka Street specialising in the early historical exhibits, whilst at the renovated Melantrichova Street museum, over 50 Czech and World figures of culture, sport and politics from the 19th, 20th and 21st centuries, who changed local and world history. At present it boasts 260 figures in all. The Prague Wax Museum also offers what it calls a multi media programme -a caleidoscopic film of Prague architecture through the ages -called Magical Prague. 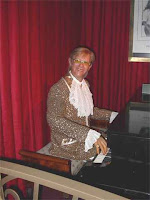 A part of Tivoli is the Louis Tussaud Wax Museum opened in 1974. The museum is concentrating not only on famous international stars but on fabled figures from Denmark and legends, as well. Here are more than 200 wax figures, everybody from Danish royalties through Leonardo da Vinci to Boris Jelcin and Bill Clinton. There are several interesting sections to visit such as Hall of Kings, Statesmen, Art Masters, Snow Queen's Castle, Chamber of Horror, and many more. There is a particular emphasis on the ubiquitous Hans Christian Andersen and his fairy tales. The Wax Museum closes permanently on August 31st 2007. Wax figures have been moved to the Ripley's Museums (Radhuspladsen 57 and Ostergade 16). 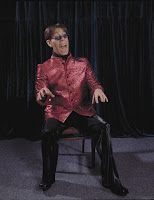 The art of wax portraits in Russia dates back to 1698 when Peter the Great returned home from a voyage with a wax head modeled after his own. The first wax museum in St. Petersburg was opened in 1738 with portrayals of contemporary kings or high ministers. Soon, wax museums began appearing all over the Russian Empire from Moscow to Odessa. They became favorite attractions for all classes of people, until the fad melted away after the Russian Revolution of 1917. The museum opened its doors in the late 1980-s, when a bunch of enthusiasts turned on the heat on the idea to revive the wax plastic arts in Russia. The Show Business Stars collections is represented by the idols of modern show business, like Michael Jackson, Elton John, Madonna, Britney Spears, Jennifer Lopez, and t.A.T.u, among others.

From the early pioneers of Rock n' Roll to present day musicians, includes Elvis Presley, Hanna Montana, Shania Twain, Madonna, Cher, Michael Jackson, Bette Midler, Barbra Streisand, and more than 60 of rock stars. The presentation of the life-size wax figures starts with personalities of the '60s. Then it's on to the punk rockers, The pop section and the modern. At the end there's a section that shows Rap's influences on Rock. Posted by the figures you'll find information about the songs and albums that they are famous.

Located right next to the famous Grauman's Chinese Theatre Star Handprints and Footprints on the Walk of Fame, the Madame Tussaud's Museum was opened in Augoust 2009. It allows you to get an up-close look at famous celebrity icons ranging from the silver screen stars of the golden era through to today's contemporary stars and movie makers. Step onto the green next to Tiger Woods, race cyclist Lance Armstrong, meet Spiderman crawling on the ceiling of an office, cozy up to heartthrob George Clooney, perform with Beyoncé and Elton John and mix and mingle among A-list celebrities including Justin Timberlake, Brad Pitt, Julia Roberts, Jennifer Lopez, Will Smith, Jennifer Aniston, Penelope Cruz, Britney Spears and Zac Efron , to name a few.

For the first time in its 44-year history, the Hollywood Wax Museum auctioned 200 wax figures in May, 2009. Fans could bid on political figures, such as George Washington and Bill Clinton, and athletes like Tiger Woods and Michael Jordan. Musicians such as Cher, Stevie Wonder and the Fab Four, along with TV and film stars including Lucille Ball, Johnny Carson, Will Smith and Charlie Chaplin. Elton wore a reproduction of one of his stage-worn outlandish costumes consisting of a black and white contrasting tuxedo, ruffled tuxedo shirt, and large sunglasses. The figure, molded by Leah DeLio, standed almost 6 ft. tall. Each figure came with a signed certificate of authenticity from the Hollywood Wax Museum. A portion of the profits would support efforts to preserve Hollywood's historic Walk of Fame.

Located in the heart of downtown, there's an interactive attraction that brings historical figures and events to life through wax figures that visitors can touch, see and hear. But it is not just about politics and history. In the Glamour section, you can mingle with celebrities such as Will Smith, Brad Pitt, Julia Roberts, Beyonce, Jennifer Lopez and Carrie Underwood. In the Sports section, you can interact with lifelike sports idols such as Babe Ruth, Muhammad Ali, Evander Holyfield and Tiger Woods. Also, the famous New Presidential Gallery and the Behind the Scenes' trade secrets used in creating the wax figures through experiences like testing your hand-eye coordination in the “Feel Like a Sculptor” interactive test. Kids and adults are fascinated when they compare their hands, feet and eyes to those of lifelike wax figures of celebrities and world leaders.

Madame Tussaud's Wax Museum Presented "The British Royals" exhibition in 2006 with huge success. Prince Harry waxwork was placed alongside his brother William and the rest of the Roayl Family. Also it was included other British celebrities like Robbie Williams, Elton John and David Beckham. The figures were on loan from Madame Tussauds London and would be in NY until January 15, 2007.

The Wax Museum of Mexico City was inaugurated in 1979 in a beautiful turn-of-the-century Art Nouveau house. It exhibits more than two hundred wax figures of political leaders, actors, artists, footballers, athletes, and other personalities from around the world, including Michael Jackson, Mother Teresa and the Wolf Man, or historic figures like Emiliano Zapata and Frida Kahlo. The collection "lives" in a fantasy concoction of a house, next to the "castle" that houses the Mexican "Ripley's Believe It Or Not!" museum next door. There's a café between the two museums, with at least 20 tables.

Ahhhh Jack Rabbit, great journey yours. Although you did a long time research, maybe you miss some of the wax museums were Elton is, I am sure Eltonites will notice you in case. Yes, yes, it's true. We mailed all of one of the museums asking for info and also, for the photo credits. I am sure you have more surprises for the Elton's figure Week. Stay tunned!!!
by Jackrabbit on 11:55 am