Elton John joined the relaunch of BBC 97.3 FM and was also in the studio as the breakfast show's star guest: "He's going to be doing a phone interview because he's in France at the moment. But he wanted to come on and wish Jane all the best and he'll be popping up several times throughout the show." said Mark Flanagan, the managing director of LBC.

Elton and the band performed at the Arrowhead Pond in Anaheim. The concert was a special benefit event with special guests like Brian Wilson, doing "Someone saved my life tonight"; Ray Charles, "Sorry seems to be the hardest word" and Bruce Hornsby on "Burn Down The Mission".

The Recording Academy added "Goodbye Yellow Brick Road" album to the GRAMMY HALL OF FAME, honored on recordings of enduring quality, relevance and historial significance. To qualify a recording must be at least 25 years old.

Attended The Golden Kamera Awards ceremony in Berlin, Germany, where he won the Life's Work Music award, in recognition of 35 years in the music business. 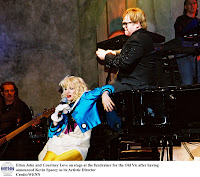 Special fund-raising concert at London's Old Vic Theatre. Kevin Stacey, then chairman of the board, contributed with Elton's "Harmony", while other guests performances featured Sharleen Spiteri on "Tiny Dancer"; Sting sang "Come Down in Time," Elvis Costello performed "Sorry Seems to Be the Hardest Word," Sinead O'Connor sang "Sacrifice" and Craig David crooned "Candle in the Wind." On "The bitch is back", Courtney Love joined Elton dressed in a Donald Duck costume just like Elton's wore in Central Park in 1980. Fred Mandel on keyboards was the surprise reappearance in Elton's band for that show.

Exclusive interview with "The Mirror" UK newspaper before his Post-Oscar raising funds party. Asked about artists recording anti-war songs, shown their opposition to Bush government against the war in Iraq and Afganistan, Elton said "America is supposed to be the land of free speech, but that's all gone out of the window. I love America and spend a lot of times here, but if you speak out against the war you're considered a traitor by some many americans".

Performed at the 10th Annual Cinema Against Aids in Cannes, France. Elton duetted with Lionel Richie on "Three times a lady" and on "I guess that's why they call it the blues"

He performed "Ballad of the boy in the red shoes" during the Life Ball Gala event in Viena, Austria. 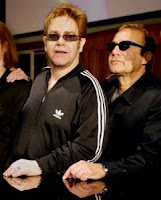 Announced "an exciting new theatrical project" with his songwriter partner, Bernie Taupin, scheduled to hit the stage in 2005. The musical would be based on three Anne Rice novels: "Interview with the vampire", "The vampire lestat" and "Queen of the damned". Elton said he was composing for an orchestra and would have no electronic components or other modern sounds.

Opened the Godfather Of Soul in New York, US with a back-to-back one hour show with James Brown.

Elton starred at Bob and Myra Kraft 40th Anniversary Wedding during an hour and forty minutes set. He sang "Moon River" from the movie Breakfast at Tiffany's because this had been the wedding song of the Krafts. While Elton was singing, parts of Audrey Hepburn flick flickered on the screens ending with the Krafts' wedding picture. 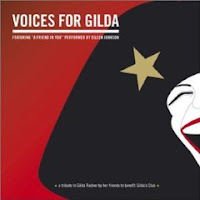 Roughly two dozen of friends, Elton on the list, contributed one track each to this two-CD tribute to Gilda Radner. She died of cancer in 1989 and left behind a rich comedic legacy and millions of fans. Elton's contribution was "Don't Let The Sun Go Down On Me", althought he recorded a cover of "Ohio" song.

Elton was the mistery guest at Harley Davidson's 100th Anniversary at Veterans Park, playing for an audience essentially indifferent to his presence, despite Elton's efforts. 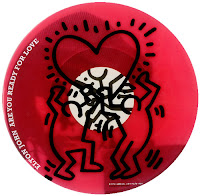 "Are You Ready For Love" was released as a single in England in 1979 to moderate success. DJ FatboySlim, real name NORMAN COOK, had been treating fans to this version on the club circuit and it's proved so successful. So, Ashley Beedle, from Xpress-2, re-mixed "Are You Ready For Love" and after becoming a fixture in the Balearic nightclubs it was used by Sky Sports for an advertisement for their soccer coverage and DJ Fatboy Slim issued it as a single on his Southern Fried record label. It went straight to #1 in the UK and on Billboard's Hot Dance Music/Club Play chart.

Nearly every item from Elton's London house in Holland Park has gone on display at Sotheby's before being auctioned. Thousands of items, including elegant and stylish furniture, paintings and works of art and leopard skin sofas and photo frames, went under the hammer. Elton said: "My love of contemporary art and photography is well-documented. I wanted to have the opportunity to display more contemporary work in one of my UK homes, but as my house in Windsor has a very traditional style, the obvious choice was to remodel my Holland Park home, both in terms of layout and interior design, to give me more scope for exhibiting this collection."

Elton signed an exclusive agreement to perform 75 shows over three years at the Colosseum at Caesars Palace, Las Vegas, beggining on February 2004. The Red Piano shows closed in Las Vegas in April 2009 with most of the concerts as sold-out.

"The Heart Of Every Girl" written by Elton and Bernie Taupin for Julia Roberts "Mona Lisa Smile" movie, had been nominated for a Golden Globe Award in the category of "Original song".
by Jackrabbit on 5:09 pm