Hello eltonites, today is a very special day on the blogsite. We have here an special guest, a true eltonite, with nice stories on her back. As some of us, she travels to other countries to see Elton's concerts, meeting other fans. A perfect mix: Elton, friends. She is well known in forums for her appropiated words about things related to Elton, she knows everything about him, and she's a dearest person. Please, a big applause for her, the incredible: Mireille!!!!

Welcome to AllSongsList. Could you tell us, more, who are you and where are you from?

I am Mireille Herz. Most Elton fans probably know me by my maiden name Mireille Molbert. I currently live in East Germany, Halle on Saale near Leipzig. I am a freelancing TV producer.

Ok! When did you became an Eltonite? Remember the first time you heard Elton's music and what moves you to buy his music?

I have no idea why but some time in 1984, I heard “Philadelphia Freedom” on the radio and pressed the record button on my cassette player. Some days later “Goodbye Yellow Brick Road” was added the same way. Then came the purchase of a cheap greatest hits album and the newly released “Ice On Fire”. Afterwards, I bought a new album from Elton’s back catalogue every month. I listened to Elton’s music almost exclusively for at least two years. A major obsession.

Yes! What was it like seeing Elton for the first time and how many concerts have you been? And, for you, which member of the band is (or was) irreplaceable? Miss someone, now?

My first live show was April 3, 1986 in Frankfurt just one day after my 15th birthday. I felt like a total rebel because I went alone. German law requires that people under the age of 16 be accompanied by an adult. I was seated in row three on the very right in front of the stage, and the only thing I saw most of the time was Elton’s white Mohawk hair piece bouncing up and down behind the piano.

I have been to A LOT of concerts. Sorry, I have lost count. There were like 20 shows all over Europe during the “The One” tour… 8 in New York’s Madison Square Garden… plus some scattered shows here and there… I’d say it adds up to something around 60 shows.

I really really miss Guy Babylon. He certainly was the most handsome band member ever! I often considered printing myself a T-shirt “The Guy Babylon Band featuring Elton John” and proudly wearing it for the show. Now I regret that I never dared to.

I would not like to ask him a question I would like to sing with him! Other than that, I’d like to watch a football match with him or go shopping. Have a girl’s day. :-)

Hahahaha that should be great!! And what is like being an eltonite in your country? Which are the germans preferences in music and which is Elton's place there?

Elton is regarded as an old gay man singing schmaltzy songs. Most people do know “I’m Still Standing” and “Crocodile Rock” but the No. 1 chart success “Sacrifice” has ruined Elton’s image in Germany forever. Yes, “Sacrifice” is definitely his most popular song over here followed by “Nikita”. That is probably the reason why he usually replaces a great song like “Levon” with one of those **** songs when he does shows here.

Do you like duets, or prefer an Elton “Duet For One”? In that case, which song and which partner have Elton to duet with? And which duet have not to be happened? Do you detested anyone?

I like the duets though I found the “Duets” album rather boring. I think “I’m Your Puppet” is the weakest duet he did but I loved “Don’t Go Breaking My Heart” with Ru Paul. I am still waiting for a duet of Elton with Rufus Wainwright – maybe an idea for a new “Face To Face” concept?

Maybe, that would be a blessed!! Which is your Elton´s item that you really appreciate, for being hard to get or for the happiness you´ve got to have it? 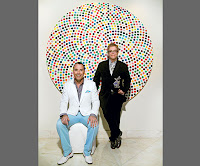 My favourite item is not something that I own but something that I gave to Elton. In 2000, I decided that for the first time I wanted to give Elton a present during the show. Being myself, it had to be something unusual. I spent days thinking and asking everyone I knew for suggestions. I finally came up with the idea to give Elton a Ken doll wearing a Dirndl (traditional Bavarian dress) and a tiara. I succeeded in giving it to Elton on Munich’s Konigsplatz (8 July 2000). Why is this so special? In early 2001, I watched the eltonjohn.com video with backstage footage from his shows in Madison Square Garden – and cross-dressed Ken was sitting in Elton’s dressing room. Those shows were three months later! A photo of the dressing room can also be found in “Eltonography” by Terry O’Neill.

Hahahaha That's fantastic!!! Apart from music, which are your interests? What you like to do with your off time?

I sing in an a cappella choir, and I occasionally play the piano. I like to travel and explore countries and places that I haven't yet been to. Whenever possible, I love to go scuba diving.

Thank you. Would you want to add some observation or suggestion, or something you want to say to other Eltonites?

Although my Elton obsession is considered weird by most people I would never want to live without it. Being an Elton fan, has helped me a lot – from troubled teenage times. I have met a lot of great people and fellow fans. I have visited so lovely places to see shows. I think it is fair to say that Elton wrote – and is still writing – the soundtrack for my life.

Thank you so much, Mireille. It was my pleasure to share this time with you. Very interesting things we talked on. All the best!!!
by Jackrabbit on 3:37 pm