AirTran Airways, a subsidiary of AirTran Holdings, Inc., announced that more than 20 Boeing 717 aircrafts had Elton John's image and XM Satellite Radio on them. The livery design also features Elton John's single "The Answer in the Sky" from his latest CD, Peachtree Road. AirTran Airways became the first commercial airline in the world to install XM Satellite Radio on its aircraft with the launch of the first flight featuring the service, and Elton John helped unveil a commemorative aircraft livery that adorned a select number of AirTran Airways' planes.

"We can show the world that Britain people can really put on the greatest on Earth" said Elton, with Mick Jagger on his side, when they supported London's bid to host the 2012 Olympic Games.

Elton ditched his publicist Barbara Charone following the disappointing sales of his 2004 "Peacthree Road" album. The news followed the dismissal of his manager Derek MacKillop after five years together. World Entertainment News Network quoted a source as saying: "Elton getting fresh blood in to do his publicity was at the top of his list (...) once Elton's made up his mind there was no going back." He handed control of his publicity over to longterm friend Gary Farrow.

Queen's Brian May called Elton John a "silly boy" over Elton's reported comments that Queen's hit West End musical 'We Will Rock You' is uncreative. May pointed out that Elton has never seen the piece of work while millions of people who have seen it and go back again and again, from all countries of the world. The guitarist also added: "I guess if Billy Elliot the Musical is still playing to ecstatic packed houses after three years in the West End, we'll take it seriously."

The stage version of Billy Elliot shocked some members of its preview audiences by performing a song looking forward to the death of Baroness Thatcher, reported the Sunday Times. Dressed in rubber masks of Thatcher, the miners sing “Merry Christmas, Maggie Thatcher, we celebrate today ’cos it’s one day closer to your death”. But Elton believed the words reflected the depth of hostility towards Thatcher: “People may find it offensive and I know she is a very frail woman now. I’ve met her on several occasions and found her very charming,” he said. “But those miners were so frustrated that they would have killed her. You are writing history and you have to tell it as it was.”

Elton had been immortalised in chocolate at Madame Tussaud's in London to celebrate Cadbury's centenary year. Elton topped a poll by the chocolate maker to find the nation's favourite celebrity. David Furnish said he hoped Elton would be delighted at the results. "I hope he's as thrilled as I am. Elton is a very competitive man who likes to do well with his concerts and records. When he had heard he had won this contest he was delighted. I take my hat off to them, it looks fantastic.

The set list for Elton was: "The Bitch Is Back", "Saturday Night's Alright For Fighting" and "Children Of The Revolution" (duet with Pete Doherty). Elton performed relatively early during Live 8 in London, he went on stage after Paul McCartney, U2 and Coldplay.

Long John Baldry passed away at the Vancouver General Hospital, July 21, 2005 at 10:30 pm after fighting a severe chest infection for the passed four months. 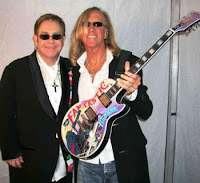 Elton John's "Captain Fantastic and the Brown Dirt Cowboy" celebrated its 30th anniversary with an expanded deluxe edition release and commmorative September 2005 concert dates. "It is ironic since we recorded this album that our lives have become the title" joked Elton, and added: "Bernie has become The Brown Dirt Cowboy living on a ranch in California raising Cutting horses and prize winning bulls and I have become Captain Fantastic travelling from the edge of the world to your town collecting photography and art and living a life beyond my wildest dreams."

Giorgio Onorato Aquilani from Italy won the Hercules Composer Competition 2005 composing the music on the unreleased Bernie's poem "Dogs In The Kitchen".

14th Annual Ella Awardin Beverly Hills, honoured Sir Elton John. ELLA honorees are carefully chosen for their contribution to the music world and for their dedicated efforts to benefit the community and worldwide humanitarian causes: "Anybody who's listened to the radio over the past thirty-five years knows that Elton John's track record is unequalled," explained Jerry F. Sharell, the president and CEO of SOS. "A couple of generations have now grown up listening to his songs, and he's truly one of the greats not just in pop and rock but also in film and theatrical music. But just as crucially, he is also a pioneer in the worldwide fight against AIDS and a humanitarian whose efforts exemplify what the ELLA Award seeks to honor."

Elton and David Furnish tied the knot in a star-studded event at the Guildhall, in Windsor, that capped the first week of civil partnership ceremonies in the United Kingdom. The pair, dressed in tuxedos, arrived in a black Rolls Royce with tinted windows and waved to the crowd gathered outside as they entered the hall.
by Jackrabbit on 12:22 pm