The Story Behind “Where We Both Say Goodbye” 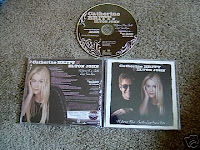 "It's my whole life. I listen to music, I read biographies, I read country music history. Most of the time, I just don't pay much attention to the outside world. So I didn't even know that Elton John was touring in Australia" said Catherine Britt when she was surprised to see Elton speaking about she on TV. Elton, who by chance was given a copy of her album, spoke about "this new girl, Catherine Britt, I heard her album the other day and just flipped out."

So enamoured with Catherine, he invited her and her family to a Sydney's show and dedicated a song to her. Elton and Catherine met backstage after the show, he asked if she was interested in signing with an American record label. Catherine told Elton she didn't have any contacts in the United States and didn't know where to start. The next day, thanks to Elton, she had three label offers and within a week she was in Nashville, signing with RCA.

When Catherine asked Elton if he wanted to record a duet with her, he said he'd love to. About what kind of song, he was happily to sing on a real country duet because he always has been a fan of country music. "This was, of course, a huge honor" reminded Catherine." We did the tracking, so all we had to do was get his vocal, and then we went in the studio and sang it live, to each other. I think that had a lot to do with the way he really got into my vibe and my style, because how often does Elton John do that? But he came into my world for a minute, and then you start to hear some of the phrasing and you think ah, there it is, there's Elton John". The result was "Where We Both Say Goodbye",and it was at number 42 in R&R and 43 on Billboard's Country Singles Chart.
by Jackrabbit on 1:29 pm