Opening night on Broadway for "Lestat", the Elton John & Bernie Taupin musical based on Anne Rice's book Interview with the Vampire. Set in France and New Orleans in the 18th and 19th centuries, "Lestat" made a point of sending up the archetypal vampire myth, with a melodramatic play-within-a-play. The terrible reviews were enough to kill Elton John's vampire musical, which closed after an anemic 39 performances. It marked Elton's first flop after he successfully composed the music for "The Lion King," "Aida" and "Billy Elliot". 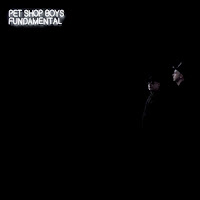 The release of "Fundamental", a special edition by Pet Shop Boys, contained "In Private (Stuart Crichton Club Mix)", a song the Pet Shop Boys wrote and produced for Dustry Springfield in 1989. This remix featured vocals by Neil Tennant and Elton John.

"I want to work with Pharrell, Timbaland, Snoop, Kanye, Eminem and just see what happens. It may be a disaster, it could be fantastic, but you don’t know until you try" declared Elton to the RollingStone magazine: "I want to bring my songs and melodies to hip-hop beats". The surprised fans remembered Elton's 1979 disco adventure when they knew he intended to record a hip-hop album with Dr. Dre.

Bernie Taupin revealed he writes hidden messages into the songs he creates for Elton John. He admited: "I've always tried to be aware of his feelings or his social or political bent, but sometimes I can be cryptic, so I've slid things in there that I know he won't realise until later on". 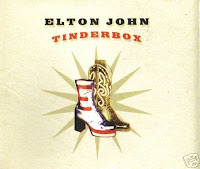 The Captain & the Kid revisited the ensuing events over the next 30+ years in the John-Taupin collaboration, and their adventures as an odd couple - Elton the high-profile performer and Taupin the writer who just wants to be a cowboy. It was the sequel of sorts to 1975's Captain Fantastic and the Brown Dirt Cowboy, the autobiographical work describing the struggles of Elton John and lyricist Bernie Taupin during the early years of their musical collaborations in England.

Elton appeared on Tony Bennett's album "An American Classic", a contemporary and emotional musical journey of the legendary entertainer's career. Tony performed duets of his greatest hits with some of greatest artists like "Smile" with Barbra Streisand, "Rags to Riches" with Elton John, "The Shadow of Your Smile" with Juanes and "For Once in My Life" with Stevie Wonder, to name a few.

Elton played a sold-out show at Rexall Place, Edmonton, Canada, promoting "Captain And The Kid" and it was a big expectation: "Elton John is a rock tourism attraction - he's simply one of those artists you must see if you're to call yourself a true fan of rock 'n' roll". 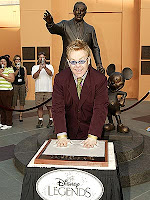 Elton John was presented with a Disney Legends award, honouring him for making a significant contribution to the Disney legacy.

Elton leaved the stage due to sickness and Davey filled a solo "Sad Songs" guitar version, while a show in Brisbane, Australia. He had to leave the stage just before "Crocodile Rock". He returned to the stage after about five minutes and told the crowd, "I thought I'd better chunder in the toilet than all over the front row."

He dedicated "Tiny Dancer" to Kylie Minogue "a dear friend", in his words.

And he dedicated "Rocket Man" to Andrew Flintoff & the Cricket Team who were in he audience as Elton's special guests, at the last show of the tour in Perth, Australia.

Film premiere "It's a Boy Girl Thing" at the Odeon Cinema, Leicester Square, London. Elton John and David Furnish attended the premiere as executive producers of the motion picture. It went on to become the 12th highest grossing UK movie in 2006 at 2.42 million pounds.
by Jackrabbit on 12:13 pm