Prince Andrew, Duke of York, was bBorn on February 19, 1960, he is also known as "Randy Andy" for his reputation with women. A naval officer, he saw active duty in 1981 during the Falklands War. Andrew currently serves in the Diplomacy Section of the Naval Staff at the Ministry of Defense. At eight Andrew went to Heatherdown Preparatory School in Berkshire before following his older brother Charles to Gordonstoun School in Morayshire, Scotland in 1973. In 1977 Andrew spent seven months on a Round Square exchange at a school in Ontario, Canada. He returned to Gordonstoun and graduated with A-levels in English, history, economics and political science in mid-1979. In 1986, Andrew married Sarah Ferguson. As a wedding gift, Elton wrote an instrumental song for the couple called "H.R.H.", with snippets from "Song For Guy", a prince favourite.

Geri Halliwell was born to Laurence Francis Halliwell, who was of English/Swedish descent, and his wife Ana María (née Hidalgo), who was of Spanish descent from Huesca, Spain and who grew up in Watford, Hertfordshire. Halliwell took her A-Levels at Camden School for Girls having taken her GCSEs at Watford Girls Grammar School. Before starting her music career, Halliwell had worked as a nightclub dancer in Majorca (Spain), a model and presenter on the Turkish version of Let's Make a Deal and as a glamour model. Geri first found fame as one of the five members of the girl group the Spice Girls, and was dubbed Ginger Spice for her "liveliness, zest and flaming red hair". Halliwell likes Elton John, not only as a friend but as a fellow artist, too. She has chosen Madman Across the Water as her favourite album by the shopping-mad singing pianist. "This album makes me realise that I can like songs instinctively without understanding what the hell they're on about," she says. "There's a song called Tiny Dancer, which is tender and sweet. I think Bernie Taupin wrote it about his wife and I can't respond to it personally but it doesn't matter; it still moves me." 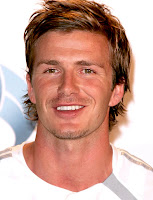 Born in Leytonstone on May 2, 1975, David Robert Joseph Beckham was a Manchester United fan from a very early age because soccer has always been the biggest thing in David Beckham's life. And precisely, Manchester United signed David to their youth training program when he was 14, and he began his pro football career at age 17. He made 394 appearances and scored 85 goals with Manchester United, before trading to Real Madrid for 23 million Euros. Beckham married Spice Girls star Victoria Adams ("Posh Spice") in July of 1999; the combination of the two heartthrobs proved irresistible to the press and public, and they became one of Britain's most famous couples.
by Jackrabbit on 1:47 pm